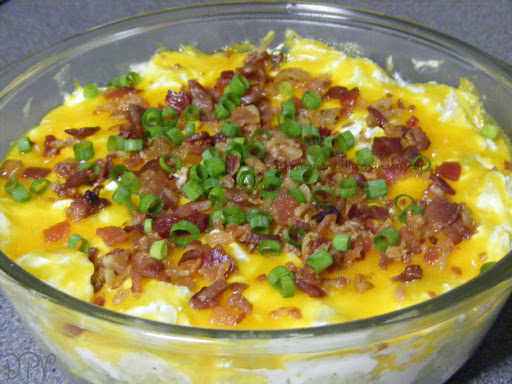 A loaded baked potato can be a great side dish or even a meal when stuffed with hearty proteins. Potatoes are a nutrient rich complex carbohydrate that is a classic, budget-friendly pantry staple. Load your baked potato up with a wide variety of meats, vegetables, and condiments. Try loading your next baked potato with broccoli and cheese or baked beans and pulled pork or stick with the classic cheddar, sour cream, chives and bacon. What will you load your potato with?

Courtesy of with Gayla Godbey and Valerie Stacy

No special ingredients or expensive grocery stores, just regular food that you can eat along with everybody else

By Foodiewife, A Feast for the Eyes

1. In a 6-8 quart stock pot over medium heat, fry bacon until crisp (or melt butter if using butter instead) 2

Combine first seven ingredients in a large crock pot; cover and cook on HIGH for 4 hours or LOW for 8 hours (potato...

Pierce potatoes with a fork