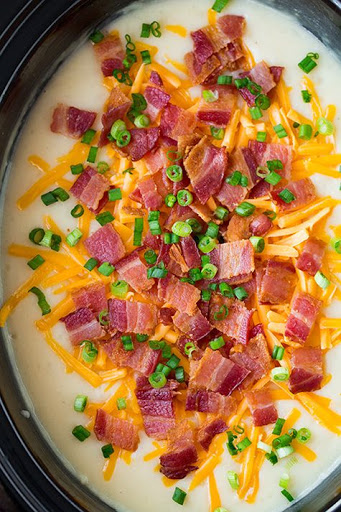 Loaded potato soup gets really easy when you make it in the slow cooker! The loaded part comes with topping the soup with cheddar cheese, bacon and green onions. 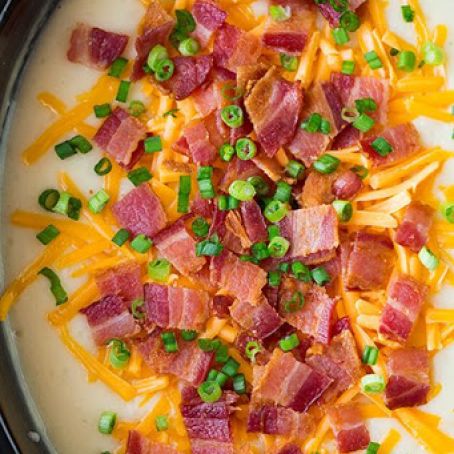 Soup doesn’t get much easier than making it in the slow cooker, does it? And here we have one of the ultimate comfort food soups made in the slow cooker. I’ve already posted four slow cooker soup recipes this season and they’re quickly becoming my favorite way to make soup so I figured I may as well post another.

Potato soup is definitely one of my favorite soups. I make it probably two or three times a month especially during the winter.

I don’t always add bacon because I don’t always keep it on hand (it’s dangerous stuff for me, I have a hard time resisting) but if we are going to label this as “loaded” potato soup, then it better have bacon. I think next time I might even try adding in some homemade ranch dressing in place of the sour cream.

To a 6 or 7-quart slow cooker, add potatoes, onion, chicken broth, evaporated milk and season with salt and pepper to taste. Cover with lid and cook on HIGH heat for 4 hours or LOW heat for 8 hours (poke potatoes with a fork to check make sure they're soft).

Ladle out 2 cups liquid from soup mixture in crock pot into a liquid measuring cup, set aside. In a medium saucepan, melt butter over medium heat. Add flour and cook, stirring constantly, 2 minutes. While whisking, slowly pour 2 cups liquid in measuring cup into butter mixture (it will thicken quickly). Pour butter mixture into slow cooker and stir to blend. If desired, mash potatoes with a potato masher to break down into smaller pieces or use an emulsion blender to puree. Cover and cook on HIGH heat until thickened, about 10 minutes. Turn heat off (or to warm), stir in sour cream. Serve warm topped with cheddar, bacon and green onions (you can just mix in those three remaining ingredients into slow cooker or top individual servings). 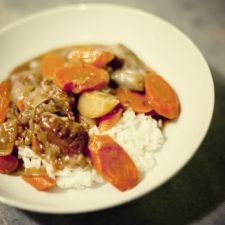