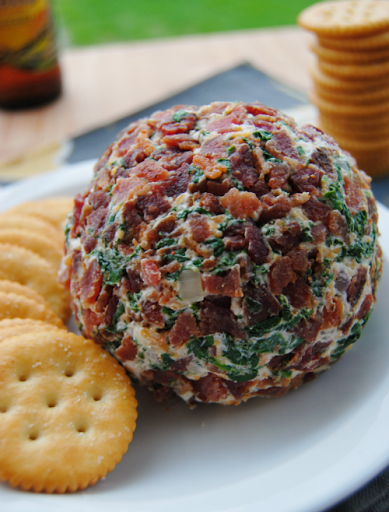 This isn't your normal basic cheese ball! Bacon Spinach Cheese Ball is sure to be a hit at your next party, if you even want to share it! Everyone will be asking for the recipe.

In a large skillet cook the bacon until crisp. Set aside to cool and drain on paper towels. Chop when cool.

Drain all but 1 tablespoon bacon grease from the skillet. Add the spinach and cook over medium heat until wilted and cooked through. Sprinkle the spinach with salt and set aside on a cutting board to cool. Chop finely when cooled.

Place the cream cheese in a large bowl. Add cheese, onions, garlic, half of the chopped bacon, chopped spinach, and cayenne pepper and stir well.

Roll the cream cheese mixture into a large ball and then roll in the remaining chopped bacon. Wrap tightly and refrigerate until ready to serve.