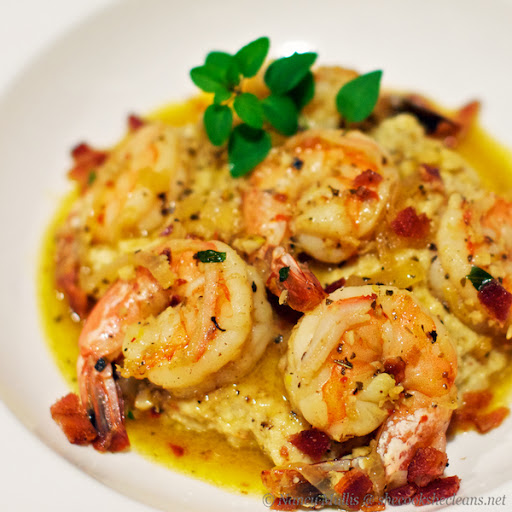 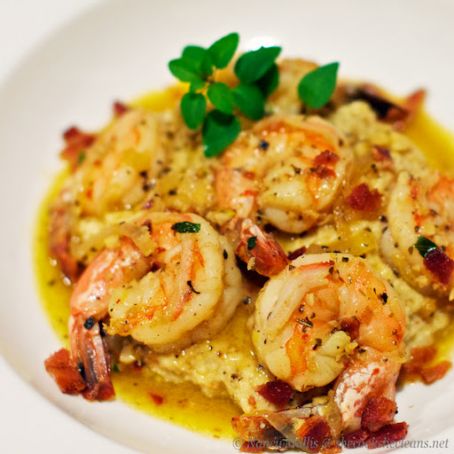 Preheat an oven to 400F. Place the cauliflower and garlic in a shallow roasting pan. Toss with enough olive oil to coat the pan and the vegetables. Season lightly with salt and pepper. Cover loosely with foil, and roast for 15 minutes. Remove foil, and shake to mix up the vegetables for more even browning. Roast uncovered for 15-20 minutes, or until cauliflower and garlic are soft and lightly browned. Remove from oven.

Using a food processor, puree the cauliflower with a couple tablespoons of butter (or more). Add the Parmesan cheese and mix well. You want to end up with the cauliflower having the consistency of mashed potatoes or grits (fairly thick, not runny). If needed, add a drizzle of cream or broth if the cauliflower is too dense. Adjust seasoning with salt and pepper. Place in a heat-proof bowl and keep warm.

In a large saute pan or Dutch oven, cook the bacon until crisp. Set aside on paper towels until cool, then chop into small pieces. Set aside.

Add two tablespoons of butter to the bacon drippings in the pan, and heat until melted over medium high heat. Add the onion and cook until softened. Add the minced garlic, red pepper flakes, and oregano, and saute for about a minute, stirring frequently. Stir in wine. Cook until liquid is reduced by half (will only take a few minutes), then add the shrimp. Cook, stirring frequently to turn the shrimp, until shrimp are pink and opaque on both sides. This should only take 3 or 4 minutes; do not overcook the shrimp or they will be rubbery! Stir in the lemon juice and remove from heat. Season to taste with salt and pepper.

Serve the shrimp and sauce over the mashed cauliflower. Garnish with chopped bacon and fresh oregano. 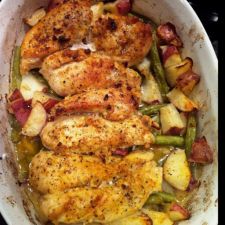