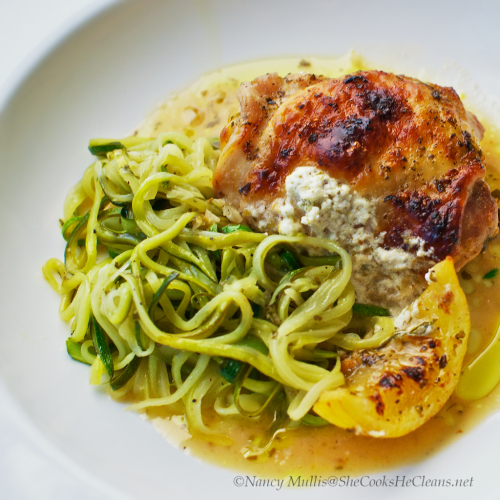 
Our oven has been out of commission all week, so cooking has been a bit of a challenge. We tried to grill as much as possible, but twice got soaked again in the thunderstorms that always pop up promptly at 6:30 pm (or whenever the grill has reached the right temperature). Also, it’s hot as blazes out there and the mosquitoes are thick and hungry! No fun!

Another alternative to the oven is cooking in a tagine on the stovetop. The tagine is similar to a mini-oven, with its curved lid that keeps the heat over the chicken and the moisture in. Ina Garten, aka as the Barefoot Contessa, has a fabulous recipe for Lemon Chicken Breast that is a classic medley of lemon, garlic, and herbs. I thought this recipe would adapt well to the tagine since the chicken only needs to simmer in the lemon, garlic, and herbs until it’s tender. My broiler was still working, so after the chicken was done, it was broiled for a few minutes until the skin was crispy and brown.

What could make this recipe even better? I combined it with one of my other favorite chicken recipes – Goat Cheese Chicken! The creamy goat cheese combined with intense lemon and garlic was out of this world! The sautéed zucchini noodles were also perfect with this mix of flavors. We’ll be having this again!


I have a new kitchen gadget and I’m not afraid to use it! It looks pretty dangerous too. Indeed, right there on the package it says “the blade is very sharp, peel away from your hands.” So noted!

It the Kuhn Rikon Julienne Peeler, which makes perfect tiny strips of vegetables with just a swipe of your hand. This photo is two zucchini that I transformed in less than 5 minutes to a big bowl of noodles. Well, I didn’t actually time the transformation, but it didn’t take long. It probably took longer than necessary because every few swipes I had to exclaim about how wonderful it was to James. After a while, he probably was just thinking about guitar strings or cello music and nodding…but he pretended to be excited and that’s what makes a good marriage.

Speaking of a good marriage, these zucchini noodles were great with Lemon Garlic Chicken with Goat Cheese! I skimmed off the excess fat from the cooked chicken and used it to quickly saute the zucchini. The fat from the chicken was already infused with garlic, lemon, and herbs, so no additional seasoning was necessary except a sprinkle of salt and pepper. The texture of the noodles was just like spaghetti – you could even twirl it on your fork. 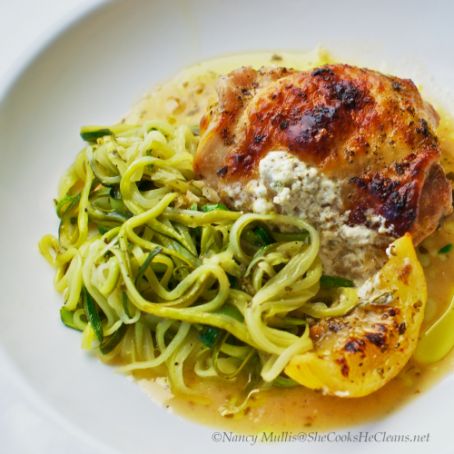 Divide the goat cheese into 6 equal portions. Using your fingers, loosen the skin from one side of the chicken thigh to form a pocket for the goat cheese. Try to keep the skin connected to the thigh on the other sides as much as possible, but don’t fret about it if it comes loose. Place a portion of goat cheese under the skin of each thigh, then press down gently on top of the skin to distribute the goat cheese over the thigh. Season the chicken liberally with salt and pepper.

Over medium heat on stovetop, heat olive oil in the tagine (or a Dutch oven). Add the garlic and cook, stirring, for about 1 minute. Do not allow garlic to brown. Add wine, lemon zest, lemon juice, herbs, and 1/2 teaspoon of salt. Place the chicken thighs skin-side-up over the sauce in the tagine. Brush the thighs with the sauce. Tuck the lemon wedges in the tagine among the chicken pieces. Simmer for 30-40 minutes until the chicken thighs are tender and cooked through; occasionally brush the thighs with more sauce.

Spoon off the excess fat and oil from the tagine and reserve for cooking vegetables. (If making zucchini noodles, just toss a couple tablespoons of the fat with the zucchini and saute until tender, but not falling apart.)

Start the broiler and place the bottom part of the tagine with the chicken a few inches below the flames or broiler element. Broil until the tops of the thighs are crispy and well-browned.

Allow the chicken to rest a few minutes so you don’t burn yourself. Serve hot with pan juices…Enjoy!

I skimmed off the excess fat from the cooked chicken and used it to quickly saute the zucchini. The fat from the chicken was already infused with garlic, lemon, and herbs, so no additional seasoning was necessary except a sprinkle of salt and pepper. The texture of the noodles was just like spaghetti – you could even twirl it on your fork. 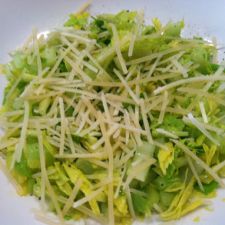