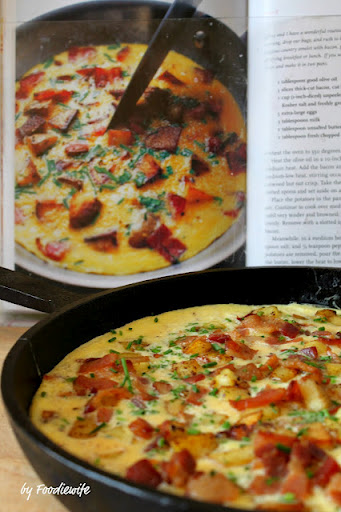 This omelet a very simple breakfast/brunch recipe, which is really like a frittata. Yukon Gold potatoes are cooked, until golden and soft, and bacon is cooked until browned. The eggs are baked to perfection and garnished with fresh chives. 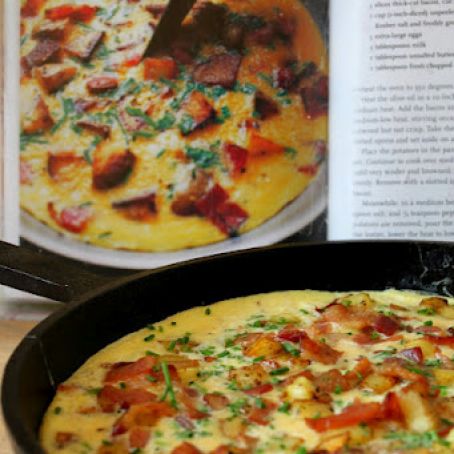 Heat the olive oil in a 10-inch ovenproof omelet pan over medium heat. Add the bacon and cook for 3 to 5 minutes over medium-low heat, stirring occasionally, until the bacon is browned but not crisp. Take the bacon out of the pan with a slotted spoon and set aside on a plate.

Place the potatoes in the pan and sprinkle with salt and pepper. Continue to cook over medium-low heat for 8 to 10 minutes, until very tender and browned, tossing occasionally to brown evenly. Remove with a slotted spoon to the same plate with the bacon.

Meanwhile, in a medium bowl, beat the eggs, milk, 1/2 teaspoon salt, and 1/4 teaspoon pepper together with a fork. After the potatoes are removed, pour the fat out of the pan and discard. Add the butter, lower the heat to low, and pour the eggs into the hot pan. Sprinkle the bacon, potatoes, and chives evenly over the top and place the pan in the oven for about 8 minutes, just until the eggs are set. Slide onto a plate, divide in half, and serve hot. 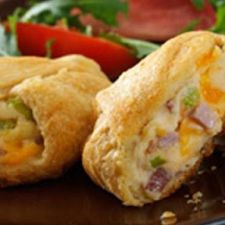