This is the easiest lobster bisque recipe you'll find! Start with a base of tomatoes, shallots and garlic and let it cook all day. Puree the mixture and add the lobster tails and cream for a rich and scrumptious meal or starter for any fancy dinner party. This recipe is simply delicious and will warm your whole family's tummies while they munch away.

In a small saucepan, heat the butter until melted over a medium heat. Add the shallots and garlic and saute until soft and translucent. Don't let them brown.

With a sharp knife cut off the fan part of the very end of the lobsters and add those to the slow cooker.

Stir, cover, and cook on low for 6 hours or 3 hours on high.

Using a blender or immersion blender puree the soup mixture to your desired chunkiness. If you use a regular blender, add the soup back into the slow cooker.

Add your lobster tails to the soup, cover and cook 45 minutes on low or until the shells turn red and the lobster meat is cooked.

Remove lobster tails from the soup and let cool slightly.

While the lobster is cooling add the cream and stir.

With a sharp knife cut each lobster tail in half long-ways and remove the lobster flesh from the shells.

Discard shells and roughly chop lobster meat and add back into the soup. 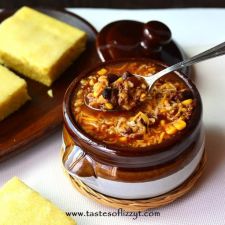