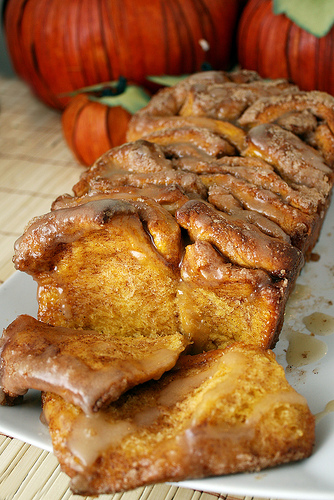 This pumpkin bread is a yeast dough base, so it is light and airy. Topped with a Butter Rum Glaze, this will be a holiday favorite! 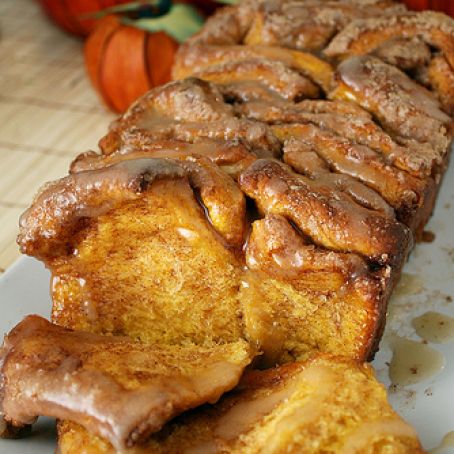 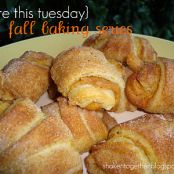 In a saucepan over medium-high heat, brown 2 tablespoons of butter, letting it bubble up and turn a dark golden brown but being careful not to allow it burn (turn black).

Once browned, remove the pan from the heat and carefully add the milk, return to stove and heat through.

Pour the milk and butter into a medium to large bowl. Allow to cool so it is no longer hot but also not cool (about 100-110°F).

Once it has reached a warm but not hot temperature add the yeast and 1/4 cup of sugar and allow to proof (this can take up to 8 minutes, the top will look foamy and the liquid cloudy).

Then add the pumpkin, salt and 1 cup of flour. Stir until combined then add the rest of the flour 1/2 cup at a time and knead for 8 - 10 minutes, until the dough is smooth and elastic and just slightly sticky. If the dough is too moist, add extra flour 1 tablespoon at a time.

Move dough to a lightly oiled bowl and cover with a clean towel. Allow rising in a warm place for 60-90 minutes or until doubled in size.

While dough is rising, brown another 2 tablespoons of butter.
Mix together the sugar, cinnamon, nutmeg, cloves, and ginger and mix well. Set aside. Next, grease and flour a 9×5 loaf pan and set aside.

When the dough has doubled in size, punch it down and flip out onto a clean floured surface and knead with hands for 1-2 minutes. Roll dough into a 20×12 inch rectangle.*

Paint the dough with the browned butter and sprinkle the sugar/spice mixture onto dough. Cut the rectangle into 6 strips. Lay strips on top of each other and cut each strip into 6 even squares (cut in half then each half into thirds). Stack strips vertically into the loaf pan. Cover the pan with a clean towel and let rise for 30-45 minutes.

In the meantime preheat an oven to 350 degrees. After rising in the pan bake for 30-40 minutes or until top is a very deep golden brown.

To prepare the glaze, heat the butter, milk, and brown sugar in a small saucepan. Bring to boil then immediately remove the pan from the heat and stir in the rum and powdered sugar.


* If dough is difficult to roll out, cover with a towel and allow to relax for a few minutes then try again. 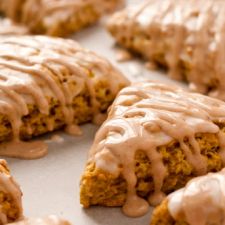