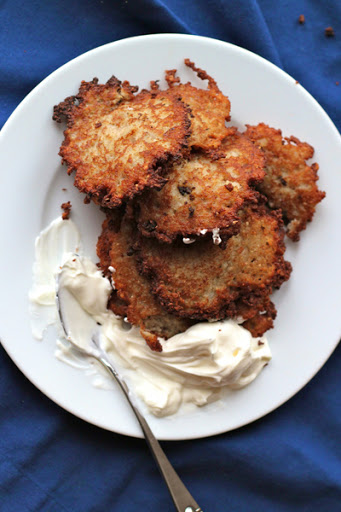 Latkes are a big part of Hanukkah celebrations. The potato pancakes can be enjoyed plain or topped with sour cream or applesauce. Try a traditional recipe, or step out with an adventurous variation! 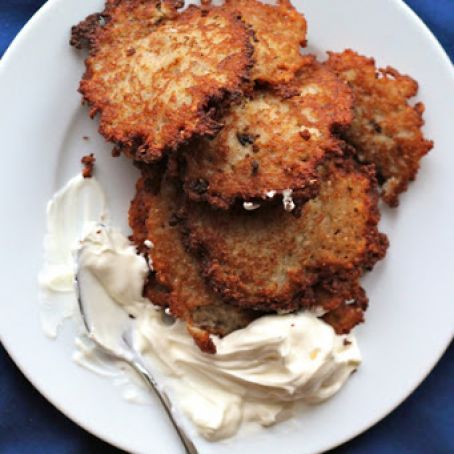 Bubbe's latkes are flavored simply with onion, salt and pepper, and are mixed with matzo meal to crisp up nicely wh...

Sweet potato latkes make for a irresistible appetizer any time or for an alternative to traditional latkes for your...

Rather than traditional shredded potato, these modernist latkes are made by freezing potato purée, then dredging p...

Russets are ideal for latkes because of their high starch content that helps to bind the pancakes, which leads to a...

Potato latkes are a favorite comfort food, and when cooked in the oven, their crispy goodness is a lighter way to e...

Impress your friends with these simple and delicious pan-fried potato pancakes made with shredded hash brown potato...

Apple Latkes are a sweet alternative to your typical Hanukkah latkes and they make a scrumptious addition to any fe...

You won't be able to stop eating these golden brown latkes especially when they are served with all your favorite t...

Boxty, Irish Potato Pancakes, with Bangers in a Guinness Mushroom and Onion Gravy

Traditional Irish bangers and mash with a delicious Guinness mushroom and onion gravy make a delicious and hearty t...

These latkes are sweeter than traditional potato latkes, but they're still the same crispy Hanukkah treat best serv...

This Potato Latka recipe is perfect to serve to your family and friends during Hanukkah, but this recipe is so deli...