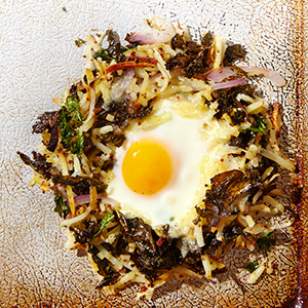 This potato and kale hash recipe is just as fun to make as it is to eat. After the potatoes and kale are roasted, the hash is formed into 4 individual “nests” that are finished with an egg in the middle. To keep the prep work to a minimum, use pre-chopped kale, found near other prepared cooking greens. If you’d rather chop your own, start with about 1 bunch and strip the leaves off the stems before chopping. 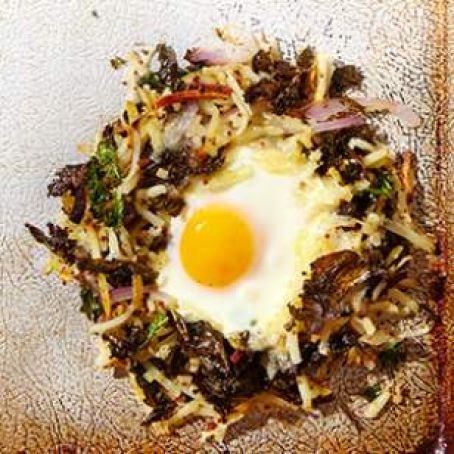 Position a rack in lower third of oven; preheat to 450°F. Coat a large rimmed baking sheet with cooking spray.
Combine hash browns, onion, garlic, oil, mustard, salt and pepper in a large bowl. Spread onto the prepared baking sheet. Roast for 10 minutes. Layer kale evenly over the potato mixture. Roast for 5 minutes. Stir the kale into the potatoes until combined. Continue roasting until the kale is tender and the potatoes are starting to brown, 4 to 6 minutes more.
Carefully push the hash into 4 “nests” and make a well in the center of each, large enough for an egg. Sprinkle 1/4 cup cheese into each well, then carefully break 1 egg into each. Bake, rotating the pan 180 degrees about halfway through, until the whites are barely set, 7 to 11 minutes. (The eggs will continue to cook a little more out of the oven.)

Tips & Notes:
For this recipe, be sure to look for unseasoned frozen shredded hash browns; if you can only find seasoned hash browns, omit the salt in Step 2. 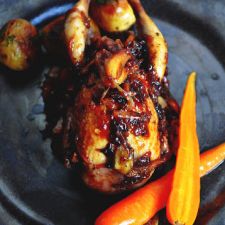