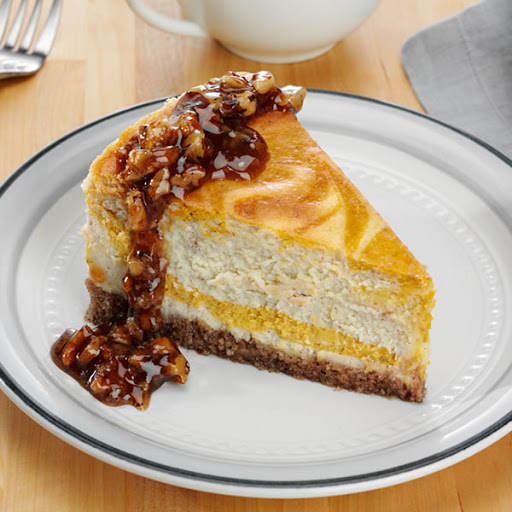 These flavors are wonderfully on top of a crust of toasted pecans that adds richness and deliciousness, it ties all of the flavors together. Nutty, pumpkinny goodness! 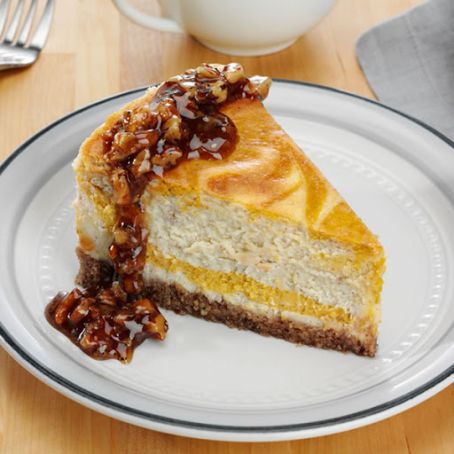 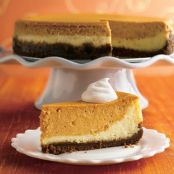 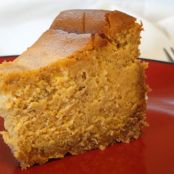 Preheat oven to 350°F. Wrap the outer bottom and sides of a 9-inch springform pan tightly with 2 pieces of aluminum foil.

Make the crust:
Place pecans in the bowl of the food processor and pulse until they form coarse crumbs. Add the butter, sugar, and salt to the crumbs and pulse until well blended. Transfer to the bottom of the springform pan and press into an even layer. Place the pan in the center of the oven and bake the crust for 12-15 minutes or until the crust is golden brown. Your kitchen will smell wonderfully of pecans! Set aside to cool.

Make the filling:
Place cream cheese in the bowl of an electric mixer fitted with the paddle attachment. Beat the cream cheese on medium speed until fluffy, 2-3 minutes. Add the sugar and continue mixing. Reduce the speed to low and add the eggs and egg yolks one by one, mixing to make sure each one is incorporated before adding the next. Scrape down the bowl between additions. Stir in the sour cream. Stir in the flour, cinnamon, ginger, and cloves until well blended.

Swirl and bake the cheesecake:
Place the springform pan into a roasting pan or large cake pan. Pour about ¼ of the batter into a medium bowl and stir in the pumpkin. Pour half of the remaining plain batter on top of the crust in the springform pan and spread it out so that it is flat. Spoon all but 1 cup of the pumpkin mixture into the center of the base, leaving a border on the sides so that the filling won’t show when the cheesecake is baked. Top the pumpkin layer with the remaining plain batter. Drop spoonfuls of the reserved 1 cup of pumpkin filling on the top of the batter and use a wooden skewer (or toothpick) to swirl the filling. Be creative with your swirl! Lower the oven temperature to 325°F. Place the roasting pans and nested springform pan inside the oven. Carefully pour boiling water into the roasting pan so that it reaches about halfway up the side of the springform pan.

Bake the cheesecake for 1½ - 2 hours. It will have risen slightly and the top will be lightly browned. Turn off the oven, open the oven door and leave it ajar. Let the cheesecake cool down slowly in the oven for an additional hour before removing the pan from the water bath. Refrigerate overnight.

Make the maple glaze:
Simmer the maple syrup in a small pot over medium heat until it reduces by about half, 5 to 10 minutes. Stir in the lemon zest, pepper, and remaining pecans. It should be syrupy. If not, cook for a few additional minutes. Cool. Top each slice with the glaze. 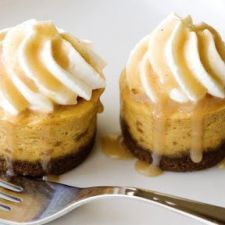