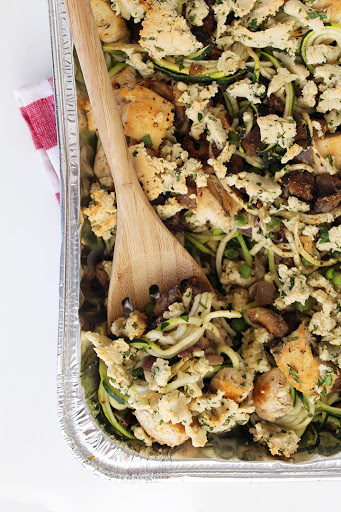 A tetrazzini is basically a spaghetti casserole cooked with mushrooms, peas and typically turkey. It’s cooked in a gravy with a splash of white wine. You’d think that this casserole would get runny and mushy, on account of the zucchini noodles. Au contraire! The proportions here are set so that you avoid any excess moisture: just creamy, deliciousness. Enjoy! 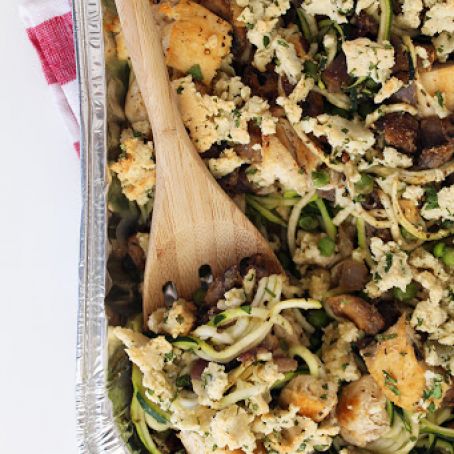 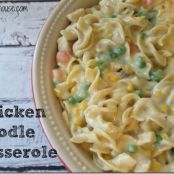 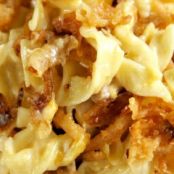 Preheat the oven to 400 degrees.

Place a large skillet over medium heat and add in 1tablespoon of the olive oil. Add in your chicken and season with salt and pepper. Cook for 3-5 minutes on each side or until the chicken is no longer pink on the inside. Remove skillet from heat and remove chicken with tongs or a slotted spoon and cut into cubes, and set aside.

While the chicken is cooking, place your zucchini noodles into a roughly 10 x 10 casserole or baking dish. Set aside.

While the chicken is cooking, place your almond meal and basil, oregano, parsley, and garlic powder in a bowl. Season with salt and pepper generously and then toss to combine and then add in the chicken broth. Using your fingers, roll like a dough until all of the meal is formed into dough. Set aside. 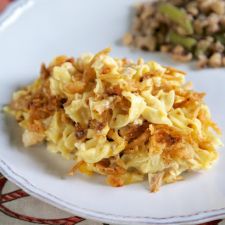