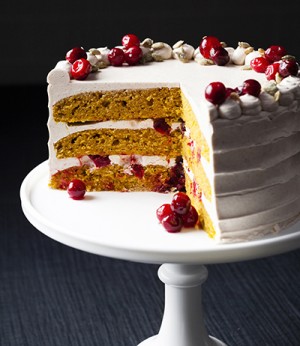 A perfect cake for Thanksgiving! Layers of delicious pumpkin cake with hints of nutmeg are smothered in a rich cinnamon buttercream frosting, then topped off with candied cranberries. Dessert is served! 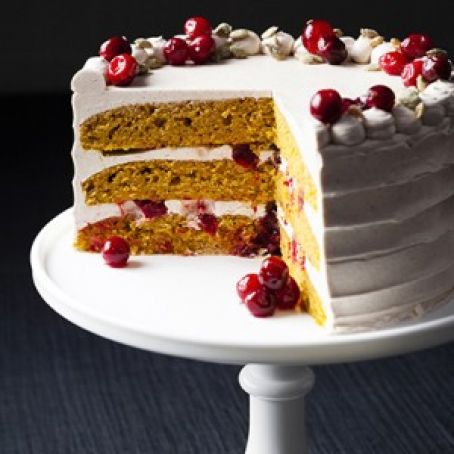 Place eggs, purée, sugar, and oil in a bowl. Whisk until smooth.

Pour the wet ingredients into the dry and whisk until just combined.

Divide batter evenly into thirds. Pour each third into a cake pan and spread batter using an offset spatula until even.

Bake for 18 to 22 minutes, turning each pan halfway after 12 minutes, or until cake bounces back when touched and a toothpick comes out clean when inserted into the center.

Allow to cool in pans, then wrap until needed. When ready to assemble un-mold from the pans and frost cake with cinnamon buttercream. It’s best to assemble the cake the same day it is baked.

CINNAMON BUTTERCREAM:
Place 1 1/2 cups sugar, water, and cream of tartar in a small pot with a candy thermometer. Cook over high heat until it reaches the soft ball stage (240°F).

Meanwhile, when sugar reaches 220°F (i.e., before it is done), place egg whites in bowl of a standing mixer fitted with whisk attachment (can also use electric handheld beater). Turn on medium speed and slowly sprinkle in remaining ½ cup sugar. Whip until soft peaks form.

When sugar reaches soft ball stage (240°F), turn mixer to high and slowly drizzle in hot sugar syrup. Once all is incorporated, whip for 3 to 5 minutes or until outside of bowl is just slightly warm to the touch. Sprinkle in vanilla and spices and whisk smooth.

Cut butter into small cubes. Add 1 to 2 pieces at a time, waiting to add the next pieces until former pieces are completely blended. (Note: The buttercream will look broken at one point, but keep going. Time and temperature will fix it.) Once all butter is added, scrape bowl and return to medium-high speed, whipping until smooth. If using within 2 days, store at room temperature covered. If waiting, store in refrigerator for up to 2 weeks or in freezer for up to 2 months. Rewhip before using.

Place sugar, cinnamon stick, and orange juice in a pot and bring to a simmer.

Add cranberries and return to a simmer. Cook until berries are just starting to swell but have not yet popped.

Remove from heat and refrigerate at least overnight but up to 3 days, so sugar sweetens berries.
ASSEMBLY:
Place first cake layer on a platter, plate, or cake stand and top with 1 cup of buttercream. Spread all the way to edges of cake layer, then top with 1/3 cup of well-drained cranberries, leaving a 1/2-inch border around the edge of the cake. Repeat with second layer of cake, then top with third layer.

Chill for 30 to 45 minutes to allow the cake to set. Remove from refrigerator and decorate with remaining buttercream. If desired, add sprinkles, crumbled gingersnap cookies, or candied pumpkin seeds.