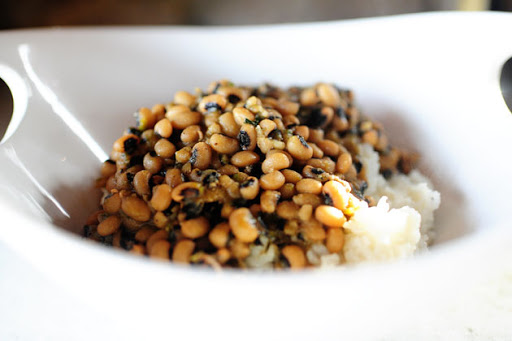 This delicious Black Eyed Peas recipe starts with the basics but includes some great variations to suit your specific taste. So have some fun and make it your own! 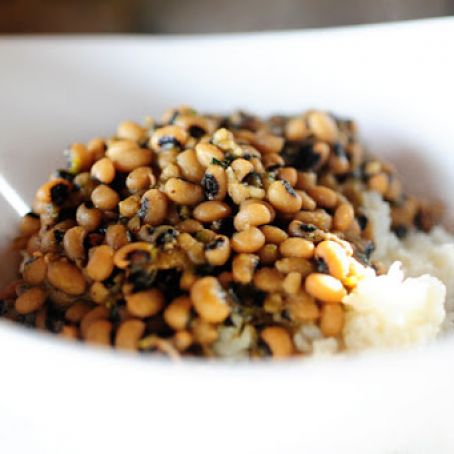 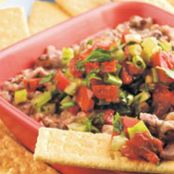 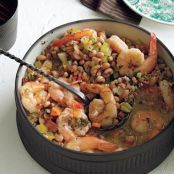 Begin by throwing a bunch of onion, celery, and green bell pepper in a pot of sizzling butter.

Stir it around and add quite a bit of minced garlic. Then cook the veggies for 3 to 4 minutes, breathing in the magical aroma.

Pour the peas right into the pot and stir them around to combine.

Then pour in low (or no) sodium chicken broth.

Next, add in a big, gnarly ham hock…

A little salt (you can always add more later)…

Then bring it to a boil, reduce the heat, and cover the pot. Simmer it for a good 30 minutes, or until the beans soften and the liquid reduces quite a bit.

At the end, I decided to add in plenty of cayenne pepper for some spice…then I stirred in some white vinegar, which is something my BFF Hyacinth always does with her Hoppin’ John.

Then you just spoon the whole thing over white or brown rice, making sure to get lots of the soupy liquid in there.

And again, this is the really basic recipe…so here are some variations:

* Add diced red bell pepper to the onion/pepper mixture at the beginning of the recipe.

* Use 4 slices of bacon cut into bits instead of ham hocks; just cook it along with the onion/pepper mixture.

* Add 14.5 ounce can of diced tomatoes to the cooking liquid with the broth.

* Stir in 1 bunch of washed, torn kale to the pot when it has about 5 to 10 minutes left of cooking time.

* Stir in a couple of sliced green onions at the end.

Have some fun with it and make it your own! 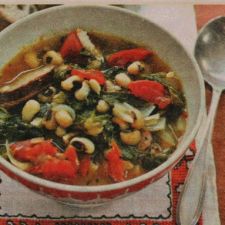 Black-Eyed Peas and Greens with Sausage