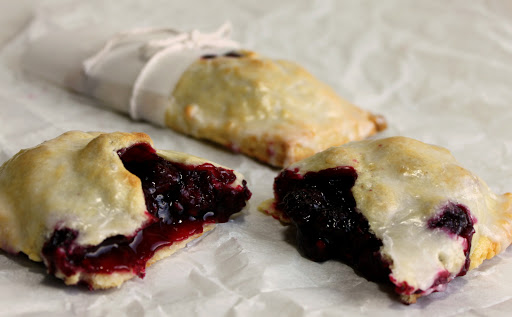 If you've never heard of Olallieberries, it might be that you don't live on the Coast of California. They are similar to a blackberry with the tartness of a raspberry. This recipe can easily be adapted to make any kind of berry (even frozen) to make a hand pie that will stand out as one of the best. They key is the Blitz Puff Pastry, which is an abbreviated technique to making classic puff pastry. The pastry turns out go be very tender, with buttery and flaky layers. To top these off, a simple glaze is brushed on for a treat that you family will love. To see how I made these, please click on the recipe source to my food blog, "A Feast for the Eyes". (Recipe adapted from King Arthur Flour.) 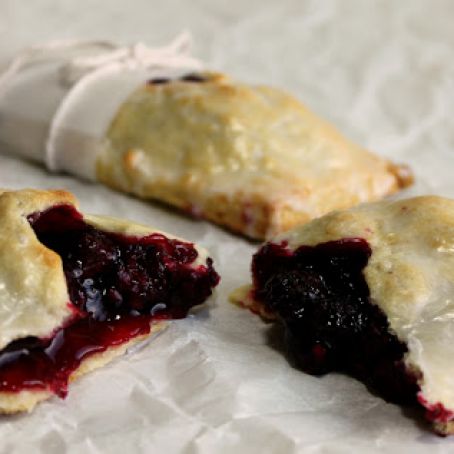 Whisk together the flour, salt, and baking powder. Add the butter, working it in to make a coarse/crumbly mixture. Leave most of the butter in large, pea-sized pieces. Note: I like to use my food processor for less elbow grease.

Stir in the sour cream; the dough won't be cohesive. Turn it out onto a floured work surface, and bring it together with a few quick kneads.

Pat the dough into a rough log, and roll it into an 8 x 10-inch rectangle. Dust both sides of the dough with flour, and starting with a shorter end, fold it in three like a business letter.

Flip the dough over, give it a 90°F turn on your work surface, and roll it again into an 8 x 10-inch rectangle. Fold it in three again.

Wrap the dough, and chill for at least 30 minutes before using. Note: I made the dough the night before.

If using blueberries, combine all the ingredients in a saucepan set over medium heat. Cook until the mixture starts to thicken, about 5 minutes. Transfer the cooked berries to a bowl and let cool to room temperature.

If using olallieberries, or any other kind of berry, combine the Clearjel with the sugar and pour over the fruit. Add the lemon juice and stir to combine. Set aside for at least 10 to 15 minutes.

Preheat the oven to 425°F; place a rack on the middle shelf. Line a baking sheet with parchment paper.

To assemble the pies: Roll the dough into a 14 x 14-inch square. With a straight edge and pastry wheel, or a 3 1/2-inch square cutter, cut out sixteen 3 1/2-inch squares. (I made mine a little bit larger, which yielded six pies.)

Divide the filling among half the squares, using about a heaping tablespoon for each. Brush some of the beaten egg along the edges of each filled square.

Cut a vent into the each of the remaining eight squares, using a decorative cutter of your choice.

Top each filled square with a vented square, and press along the edges with the tines of a fork or a pie crust crimper to seal.

Combine 1 cup confectioners’ sugar with 1/4 teaspoon Instant ClearJel and enough milk or cream to make a spreadable icing. Paint the icing on with a pastry brush or a nylon spreader.

Why add that touch of Instant ClearJel? It helps the icing set up neatly, like the icings you see on doughnuts at you-dunkin-know-where. You’ll still get nice little drips, but they’ll set up and not melt as they would with straight confectioners’ sugar glaze.


Optional, instead of the glaze:

Brush the top of each pie with the remaining beaten egg, and sprinkle with sparkling sugar. Transfer the pies to the prepared baking sheet.

Bake the pies for 18 to 20 minutes. Remove them from the oven, and let cool for 10 minutes icing. Otherwise, allow the pies to cool for at least 20 minutes before serving. 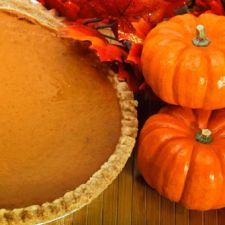