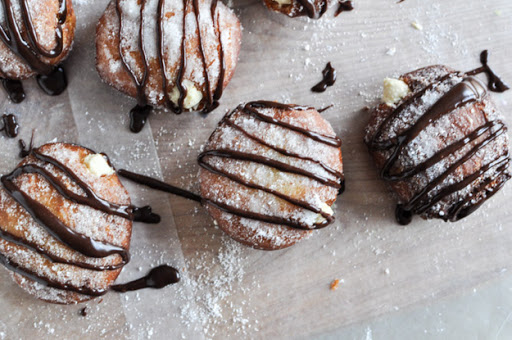 Peanut butter pastry cream filled donuts drizzled with chocolate are best eaten right away, like you could wait any longer. These seriously delicious donuts are served best with good friends and good coffee. Enjoy on any breakfast or brunch spread, or even just a lazy Sunday morning. 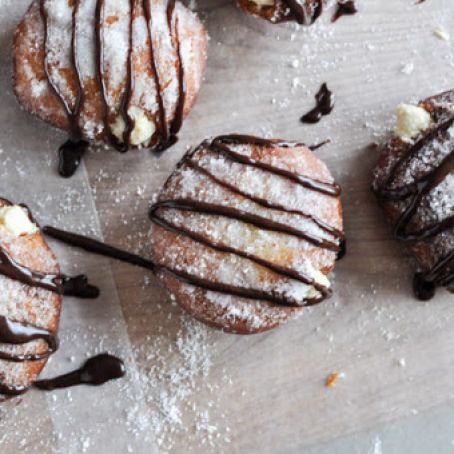 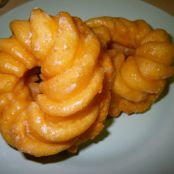 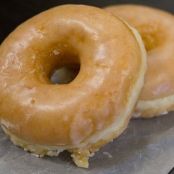 In the bowl of electric mixer, with the dough hook attached, add milk and yeast, stir and let sit until yeast dissolves, about 1 to 2 minutes.

Add flour, 1/3 cup sugar, salt, eggs, and vanilla, mixing on low speed until combined, then on medium-low speed for 2 to 3 minutes. Gradually add in softened butter, mixing until the butter is combined and the dough is soft, about 5 minutes. The dough will probably be sticky, so if needed add in a few teaspoons of flour to remove it from the bowl.

Wrap it in plastic wrap and refrigerate for 4 to 6 hours or overnight.

PEANUT BUTTER PASTRY CREAM:
While the dough is refrigerating, make the pastry cream since it has to chill. In a small bowl, stir together flour, sugar, and salt. In a large bowl, whisk together egg yolks. Slowly add the flour mixture to the eggs, whisking until smooth and pasty. Heat a saucepan over medium heat and add milk, allowing it to heat until bubbles form around the edges, but not boil. Remove the milk and slowly add it to the egg and flour mixture, whisking constantly until combined. Once smooth and mixed, add the entire mixture back to the saucepan, heating over medium heat and stirring constantly. Cook until it thickens and comes to a boil, about 2-3 minutes. Immediately remove from heat and strain through a fine mesh sieve. Then whisk in vanilla and peanut butter. Place in a bowl and cover with plastic wrap, pressing it until it touches the surface of the cream. Chill for at least 4 hours or overnight.

Remove donut dough and place on a floured surface. Roll it out until it is about 1/2 inch thick, then use a standard size biscuit cutter and cut out as many rounds as you can. Place on a baking sheet in a warm place and let rise for 2-3 hours, until they've doubled in size.

Heat a few inches of oil over medium-high heat in a large saucepan. Once the oil reaches 350°F, add the doughnuts 2 to 3 at a time and fry until golden brown, about 2 to 3 minutes per side. Make sure you are using a thermometer, do not allow your oil to get too hot. The doughnuts need nearly 4 to 5 full minutes in the oil so the insides cook, and if it's too hot the dough will burn and the inside won't be all of the way cooked. After frying, transfer each doughnut to a paper towel to let the excess oil drain. Let them cool to the touch, the roll in the remaining sugar.

Give the doughnuts another 30 to 45 minutes to cool completely. While this is happening, beat the cold heavy cream in your electric stand mixer or with a handheld mixer until stiff peaks form. Fold in the peanut butter pastry cream, taking a few good minutes to fold it in completely with a large spatula. Using a pastry bag, a ziplock bag, or even a spoon, poke a hole inside the side of the doughnut and fill it with a bit of the pastry cream.

To make the chocolate drizzle, heat the heavy cream until warm then pour over the chopped chocolate. Stir continuously until melted and smooth, then cover or drizzle the doughnuts. Serve immediately. 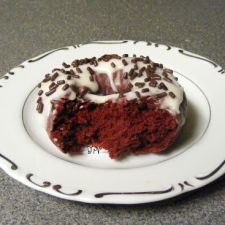