We are at that time of year again when spring sports start up. My daughter plays for 3 (possibly 4 if she makes the Provincial team) Rugby teams, my son plays for the local soccer house league and I play for the city women’s soccer league. To say the least with practice and games almost every night of the week I need to be creative with quick week night meals. Tonight I will be watching my daughters game and it is a late start so I decided to throw this stuff in the crock pot for a yummy soup that will be ready when we finally get home.

As you know I don’t eat meat so instead of cooking the chicken in with the soup I decided to BBQ the meat and serve it to the rest of the family so I can keep the base of the soup vegetarian.

I don’t have a lot of time in the morning for prep so it was nice that this meal only took 5 minutes to get started. I roughly chopped up the onions and the Carribean yams (sweet potatoes) threw them in the crock pot and voila, done like dinner.

Place all ingredients in your slow cooker and cook on low for 5-6 hours.

Remove chicken and shred. Stir all ingredients together and serve.

Top with green onions and Sriracha if desired. Leftovers may be stored in an airtight container in the refrigerator for up to 1 week. 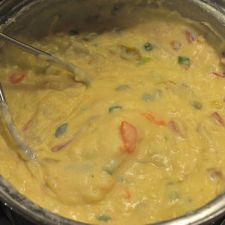