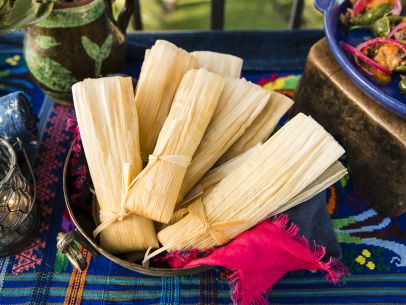 These awesome Rajas con Queso Mini Tamales are popular in the state of Zacatecas in Northern Mexico which you must try if you ever are there. Meanwhile, you may bring the great taste of these Tamales home with this delicious recipe!

Place the corn husks in a large pot and cover with water. Bring to a boil, then reduce the heat to medium and simmer until softened, about 8 minutes. Drain.

Roast the poblanos over the flame of a gas burner, turning, until charred, about 4 minutes. Transfer to a bowl, cover with plastic wrap and let cool. Peel the poblanos with your fingers and discard the stems and seeds, then coarsely chop. Melt the butter in a medium saute pan over medium heat. Add the onion and cook, stirring, until translucent, about 5 minutes. Add the garlic, corn and poblanos and cook 2 more minutes. Add the crema; when it starts bubbling, reduce the heat to low and stir in the cheese until melted. Season with salt and set aside to cool.

Tear 4 corn husks into 1/2-inch-thick strips to use as ties; set aside. Assemble the tamales: Hold an open corn husk in one hand; spread about 2 tablespoons dough on the husk, leaving a 1 1/2-inch border on all sides. Spoon 1 tablespoon of the filling down the center, then fold in the long sides of the husk to cover the filling and fold up the narrow short end (leave the wide end open). Tie a strip of corn husk around the tamale to hold the folded flaps in place. Repeat to make 12 tamales.

Place the tamales, open-side up, in a steamer basket set in a large pot. Add enough water to cover the bottom of the pot by several inches, but not enough to touch the tamales. Bring to a boil, then reduce the heat to medium low; cover the pot with a kitchen towel and a lid and steam until firm, 1 hour to 1 hour 15 minutes, adding more water to the pot if needed. The tamales should pull away from the husks without sticking; if they're still sticky, continue cooking.