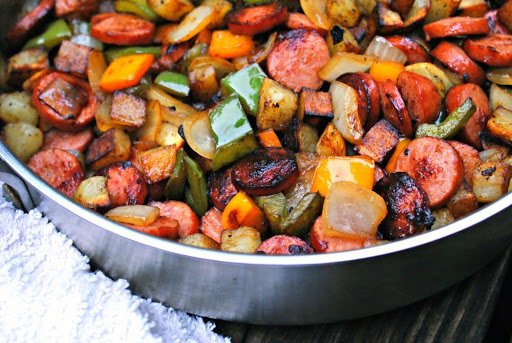 Kielbasa, Pepper, Onion and Potato Hash is an easy to make, healthy and delicious meal that comes together in just 15 minutes, featuring tons of fresh veggies and lean turkey kielbasa. 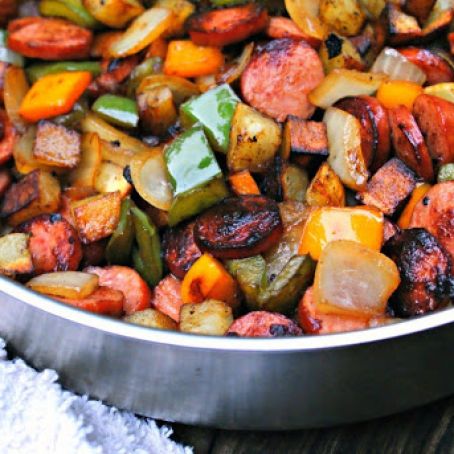 In a heavy bottomed skillet (I like to use my cast iron), heat 2 tbsp of olive oil over medium-high heat. Add the potatoes to the skillet and season with salt and pepper. Fry until golden brown and cooked through, around 8-10 minutes, stirring a few times to ensure even browning.

In a separate skillet, brown the sliced kielbasa for around 5 minutes in 1 tbsp of olive oil over medium high heat. Remove the kielbasa from the pan and set aside. Add the peppers and onions to the skillet and season with a pinch of salt and pepper. Cook for 5 minutes, or until softened, stirring occasionally.

Add the cooked potatoes and kielbasa to the skillet with the onions and peppers and mix everything together. Serve nice and hot!

I use two skillets to make this recipe. I used to make it in one, but something always came out wrong. I've learned that when I cook my potatoes in a separate skillet they cook more evenly and stay nice any crispy when they're added to the other ingredients right before serving.

Sometimes I'll add some minced garlic to the peppers and onions, but it tastes just as good without it.