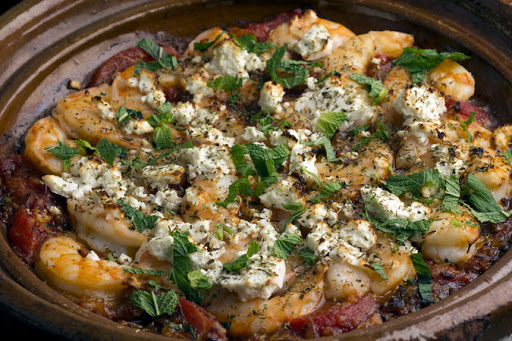 Recipe source: NY Times Food | David Tanis
Though it can be made year round with canned tomatoes, it is sensational with fresh sweet ripe ones, so best prepared in summer. Serve it as a main course with rice or potatoes, or in small portions as an appetizer, taverna-style. 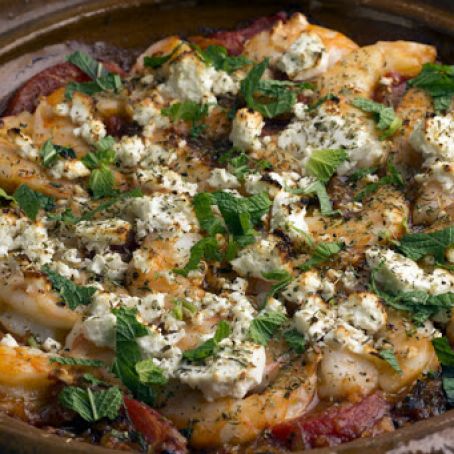 1. Put 4 tablespoons olive oil in a wide skillet over medium heat. Add shallots and garlic, season with salt and pepper and cook, stirring, until softened, about 5 to 8 minutes. Lower heat as necessary to keep mixture from browning. Remove from heat while preparing tomatoes.

2. Fill a saucepan with water and bring to a boil. Add whole tomatoes and cook for about 2 minutes, until skins loosen. Immediately plunge tomatoes in a bowl of cold water to cool, then drain. With a paring knife, core tomatoes and slip off skins. Cut tomatoes into thick wedges.

3. Heat oven to 400 degrees. Return skillet to stove over medium-high heat. Add tomato wedges and season with salt, pepper and red pepper flakes. Cook, stirring, until mixture is juicy and tomatoes have softened, about 10 minutes. Transfer mixture to a shallow earthenware baking dish.

4. Put shrimp in a mixing bowl. Add 1 tablespoon olive oil, season shrimp with salt and pepper and stir to coat. Arrange shrimp over tomato mixture in one layer. Crumble cheese over surface and sprinkle with oregano.

5. Bake for 10 to 12 minutes, until tomatoes are bubbling and cheese has browned slightly. Remove from oven and let dish rest for 5 minutes. Sprinkle with mint and serve. 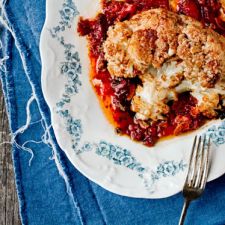