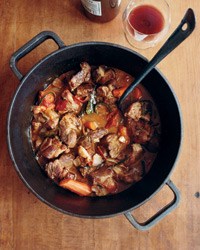 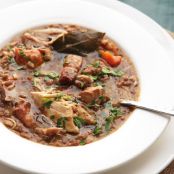 In a very large enameled cast-iron casserole, heat the vegetable oil until shimmering. Season the pork with salt and black pepper and add half of it to the casserole. Cook over moderate heat, turning, until browned all over, about 10 minutes. Using a slotted spoon, transfer the pork to a plate. Brown the remaining pork.
Return all of the pork to the casserole along with any accumulated juices. Stir in the onions, garlic, carrots, chiles, bay leaves, cloves, lime juice and chicken stock. Season with salt and pepper and bring to a boil. Add the tomatoes, nestling them into the liquid. Cover and cook over low heat until the pork is very tender and the carrots are cooked through, about 3 hours. Discard the bay leaves and stir in the cilantro. Serve with rice and sliced jalapeños.

Make Ahead The stew can be refrigerated for up to 3 days. Reheat before serving.
Suggested Pairing

This Mexican-influenced dish gets its earthiness from ancho chiles, a flavor that pairs well with Argentina's premier grape, Malbec. Originally from France, this dark-berried, spicy variety reaches its pinnacle in Mendoza, producing juicy, potent wines. 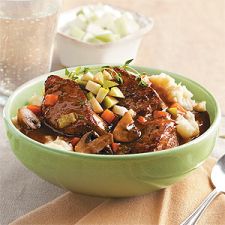