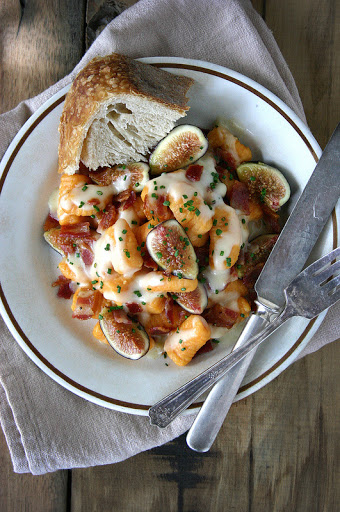 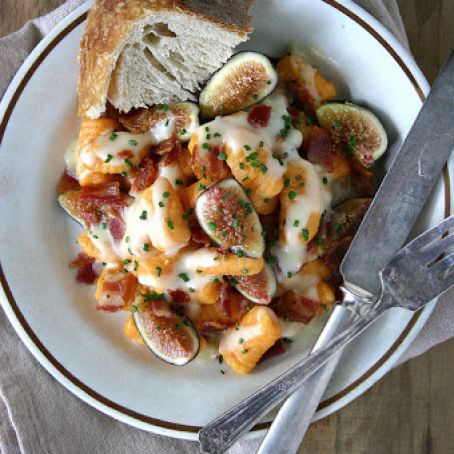 To make gnocchi:
Prick potatoes all over with a fork and steam in microwave wrapped in damp paper towels until tender all the way through when pierced & fully cooked. Rotate half way through cooking, about 3-5 minutes per side for medium sized potatoes. Alternately, roast in a 400° F oven about 50-60 minutes.
While potatoes are still hot, handling with towels, slice in half. Scoop flesh out and press through a potato ricer into a rectangle (not a pile). Alternately you can use a food mill or box grater to shred the potatoes. Let cool until about room temperature. (Note: the potatoes are riced hot and into a rectangle to maximize their release of steam because the less moisture in your potatoes the less flour you will need to add resulting in lighter gnocchi. Also, I do not salt my gnocchi as salt draws in moisture, making for mushy gnocchi. Rather, I generously salt the cooking water. The more you know…)
Drizzle potatoes with egg yolk, crumble the ricotta on top, and sprinkle ½ cup of flour on top. Using a bench scraper or spatula, cut the flour, yolk, and ricotta into the potatoes using a chopping motion until beginning to become incorporated. Then start using the bench scraper to fold the mixture together. Sprinkle with an additional ¼ cup of flour, and chop/fold it in. At this point I switch to using my hands, lightly floured.

Cut log into 8 individual segments. Lightly flour work surface. Roll one segment out at a time into 1” thick logs. Cut logs into individual pieces, about 1”. To create grooves, the gnocchi can be rolled on a gnocchi board or the tines of the fork. This step is optional. Place formed gnocchi on a parchment lined baking sheet. Refrigerate until ready to cook if cooking soon, otherwise the gnocchi can be frozen on the sheet tray and then placed into a ziplock bag and kept in the freezer up to 3 months. To cook frozen gnocchi just put directly from freezer into boiling water just as with fresh gnocchi, do not thaw.

To make sauce:
Melt 2 tbsp butter over low heat. Stir in 3 Tbsp flour. Bring roux to a bubble on medium low and let cook about two minutes, careful not to brown. Meanwhile warm buttermilk slowly and ¼ tsp salt until just warm. Do not get it too hot or it will curdle, just warm it gently. Whisking constantly slowly pour warm buttermilk into roux. Bring to a boil over medium high heat and whisk constantly until thickened. Remove from heat, stir in fresh nutmeg & cayenne to taste. Stir in cheese until fully melted. Taste and adjust seasoning if desired. Sauce can be kept warm over a simmering water bath, stirring occasionally to prevent skin from forming or it can be just set aside, uncovered, if using shortly. Again, stir to prevent skin.
Bring a large pot of salted water to a boil. Add gnocchi. Give them a gentle stir after a few seconds to prevent sticking. Cook about 2 minutes or until they float to the top. Remove, draining well, with a slotted spoon or spider. Toss gently with mornay sauce, pancetta, and figs. Sprinkle with chives and serve immediately. 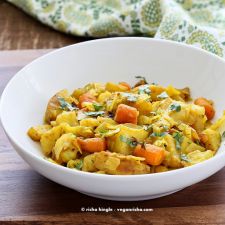