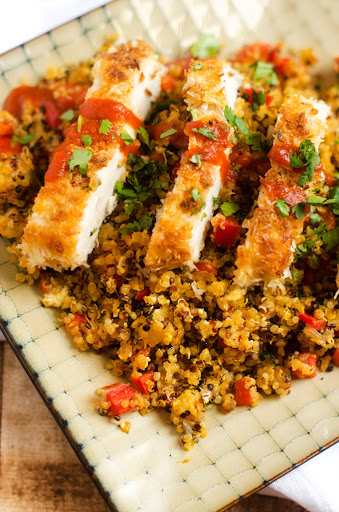 Pineapple fried quinoa is a twist off of Chinese fried rice, topped with sliced fried chicken that is seasoned with jerk seasoning and coconut. Yum! 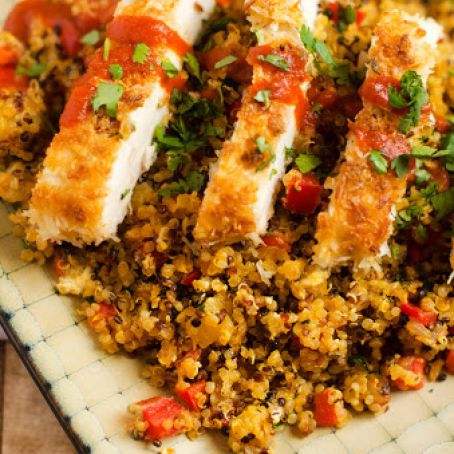 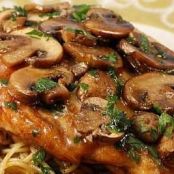 In a shallow bowl combine arrowroot powder and jerk seasoning.

Place egg in another shallow dish. In a third dish, combine coconut and bread crumbs.

Pound chicken thin and dredge in arrowroot mixture. Dip in egg and then dredge in coconut quinoa mixture.

Heat oil to medium in a large ovenproof skillet. Cook chicken for 3 to 4 minutes per side, until golden. Transfer to oven and cook for 5 to 10 minutes or until done.

Meanwhile, make quinoa by heating coconut oil in a large skillet over medium-high heat. Add pineapple, onion, and chili-garlic sauce. Cook for 8 to 10 minutes. Reduce heat to medium. Add prepared quinoa, red pepper, 1/4 cup cilantro, lime zest, salt and pepper. Cook for 3 minutes, stirring to prevent sticking. Make a well in the middle of the quinoa and add eggs. Cook until scrambled and then stir into quinoa.

To serve, slice the chicken and serve on top of the quinoa. 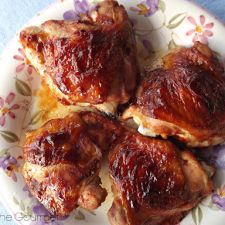