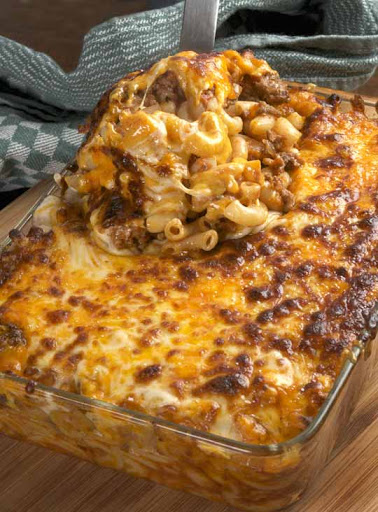 Macaroni and Beef with Cheese 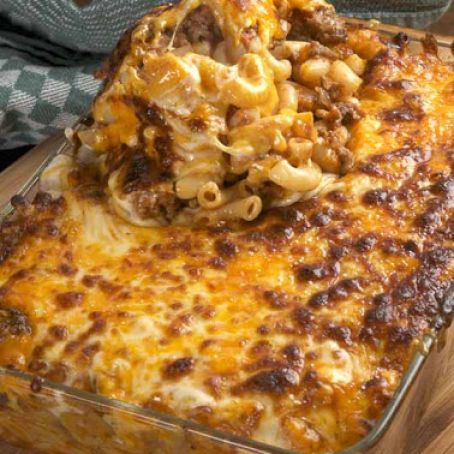 Sweat the onions in the oil with a three-fingered pinch of salt. Add the beef and cook it, breaking it up as you do. (Because my beef was very fatty, I cooked it separately and added it to the pot along with the tomatoes. Also an option, but uses an extra pan.) Add another three-fingered pinch of salt or two, along with any dry seasonings you want. Add the tomatoes and any fresh seasonings you may be using, bring to a simmer, then reduce the heat to low and cook for an hour.


Cook the macaroni in boiling water till it’s half done. Drain it and add it to the tomatoes. (I wanted this to stretch into two meals, so I used the whole box, but if you want your dish to be very tomatoey and beefy, you might want to add only half the macaroni). Stir it into the sauce. Taste it. Add more salt and other seasonings as needed, and cover. When it’s cooled and the pasta has absorbed the tomato juices, transfer it to a large baking dish and cover it with foil. It can sit out for several hours like this, be refrigerated for up to two days, or frozen a few weeks.

Bake it in a 400 degree oven till it’s piping hot (about 45 minutes if it’s cold to room temperature). Just before you’re ready to eat, remove the foil, cover macaroni with the cheese and broil till it looks beautiful. 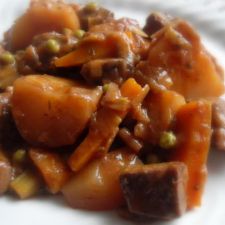