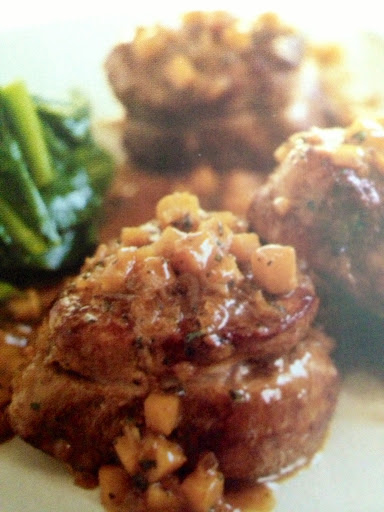 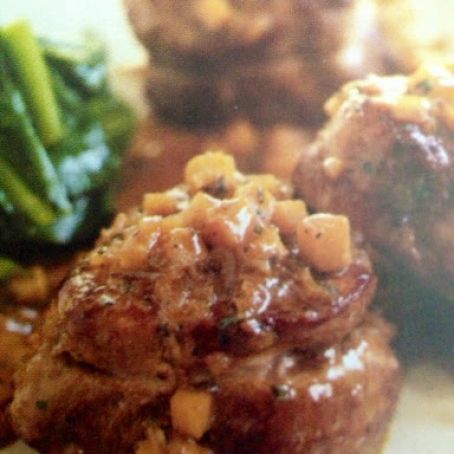 For The Meat: Season the pork with salt and pepper. Heat the oil in a 12 inch skillet over medium high heat until shimmering. Add the pork cut side down and cook, without moving the pieces, until well browned, 3 to 5 minutes.
Turn the pork and brown the second side, 3 to 5 minutes more. Reduce the heat to medium. Using tongs, stand each piece on its side and cook, turning the pieces as necessary, until the sides are well browned, and the internal temperature registers 145 to 150 degrees on an instant read thermometer, 8 to 12 minutes. Transfer the pork to a platter and tent loosely with foil.

For The Sauce: While the pork cooks, combine the cider, broth, vinegar, and cinnamon stick in a medium sauce pan; simmer over medium high heat until the liquid is reduced to 1 cup, 10 to 12 minutes. Remove the cinnamon stick and discard. Set the sauce aside until the pork is cooked.

Pour off any fat from the skillet in which the pork was cooked. Melt 1 T of the butter over medium heat; add the shallots and apple and cook, stirring occasionally until softened and beginning to brown, 1 to 2 minutes. Remove the skillet from the heat and cook bout 1 minute, scraping the bottom of the pan with a wooden spoon to loosen the bits from the bottom of the pan. Add the reduced cider mixture, and juices from the resting meat, and thyme; increase the heat to medium high and simmer until thickened and reduced to 1 1/4 cups, 3 to 4 minutes. Off the heat, whisk in the remaining 3 T butter and season with salt and pepper to taste. Pour the sauce over the pork and serve immediately.

NOTE: After cutting the tenderloin into symmetrical 1 1/2-inch medallions, you will inevitably have a few irregularly shaped pieces left over. The tapered end pieces can be scored,folded and tied into medallions. Tie any remaining smaller pieces together into a medallion shape, making sure the top and bottom surfaces are flat. 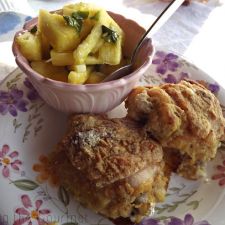