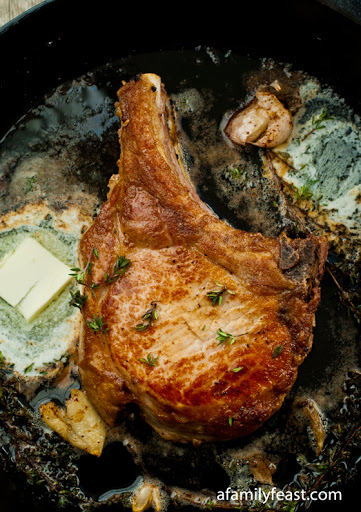 For perfectly tender and juicy restaurant-style pork chops, sear them over high heat, finish cooking in the oven, then baste with brown butter, thyme, and garlic. 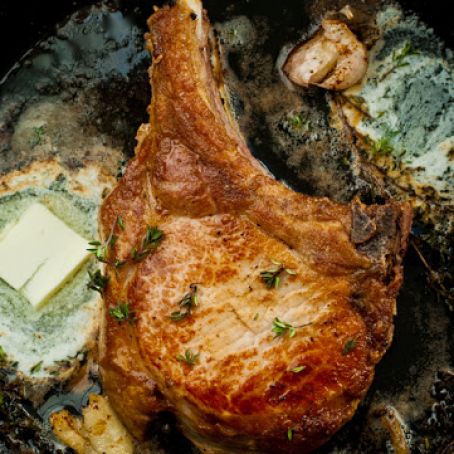 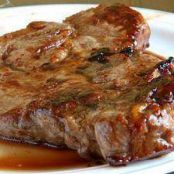 Preheat oven to 450°F. For later in this recipe, place a cooling rack over a large dish or pan.

In a large cast iron pan, or other oven-proof sauté pan (do not use a non-stick skillet), heat the oil over medium-high heat until hot. Place the two chops in the pan, not touching each other, and let them cook—leaving them alone for three minutes. Turn and cook untouched for two more minutes. Then keep flipping every two minutes for about 10-12 minutes or until golden brown.

Remove the pan from the flame and insert a probe thermometer horizontally into the thickest part of one of the chops and set the probe to alarm at 135 degrees. Place the pan with the pork chops in the pre-heated oven and turn the chops every two minutes for about 14-15 minutes or until they reach 135 degrees. (They will cook further after you take them out of the oven so don’t leave them in the oven past 135 degrees. The internal temperature will rise to 145 degrees which is the USDA's minimum recommended temperature for cooked pork.)

Remove the pan from the oven and set chops temporarily on the prepared rack. Drain off oil from the pan and discard. Place the pan on stove top over medium heat and add butter, garlic and thyme. Cook for two minutes, scraping up any brown bits, then add the chops back to the pan and baste continually; flipping the chops two or three times to fully coat with butter sauce, about two to three minutes. Turn off the heat.

When ready to serve, place the chop on a cutting board vertically and with a long knife, slice down between the two bones. When you get to the connecting bone, snap it or cut it off. This will give you two portions of equal size for each chop for a total of four servings. Serve the pork chop with a little of the browned butter sauce. 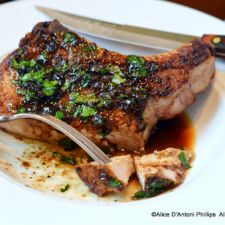