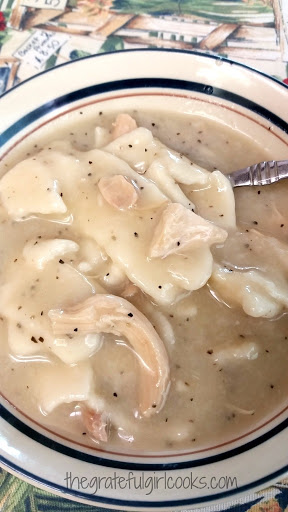 Southern-Style Chicken n' Dumplings... a filling soup, just the way my Grandma used to make it! 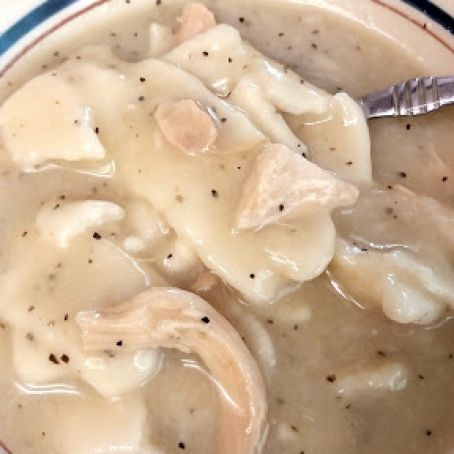 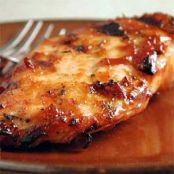 Put the chicken and the veggies (if using) in a large stockpot. Cover completely with water. Bring to a quick boil, then continue cooking chicken for one hour. When done, remove chicken to large bowl to cool. Strain broth to remove leftover veggies or other particles. Return broth to stockpot.

Once chicken is cool, remove skin, then cut chicken into bite sized pieces. (At this point I divide the chicken pieces in half, and freeze half for use in another meal).

Add chicken pieces (approx. 2½ cups) back into chicken broth. Heat the chicken and broth back up to boiling. Add bouillon cubes, salt and pepper (to taste).

While chicken is coming to a boil, make the dumplings. In a large bowl, using a pastry blender or two knives, cut the shortening and salt into the cup of flour, until shortening is the size of small peas. Add ½ cup HOT water and ½ cup, plus 2 Tablespoons of flour to the mixture. Stir and work the mixture until a soft dough ball forms (firm enough to roll out). Divide dough into 3 equal sized balls, then let the dough rest for 10 minutes.

Generously flour a work surface. Roll each dough ball out (one at a time), sprinkling with flour (if necessary) to keep dough from sticking to work surface. Roll out to about the size of a large pie crust (roll out thin). Cut dough into strips about an inch wide using a pizza cutter or knife. Repeat process for remaining dough balls.

Drop dumplings a couple at a time into hot boiling chicken/broth mixture until all have been added to pot; add butter, and continue cooking.
Make a slurry by mixing ¼ cup water with 2 large Tablespoons flour. Stir well to combine, then add to soup pot, and stir well. (this helps to thicken broth a bit).

Cook an additional 10 minutes on high to fully cook dumplings.
Taste test broth, and add additional salt and pepper, if desired.
Ladle hot soup into bowls, serve, and enjoy (especially with crusty french bread on the side!)

Notes
If you are pressed for time, you can always start with store bought chicken broth (cook the chicken in water/drain, THEN use broth in pot), and can also use a pre-cooked rotisserie chicken to get the chicken from, BUT I prefer to make it the way I have posted it, as it is far less expensive... but, hey... whatever works, right? 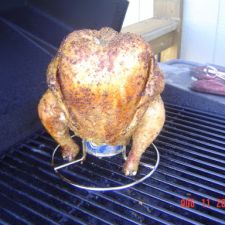