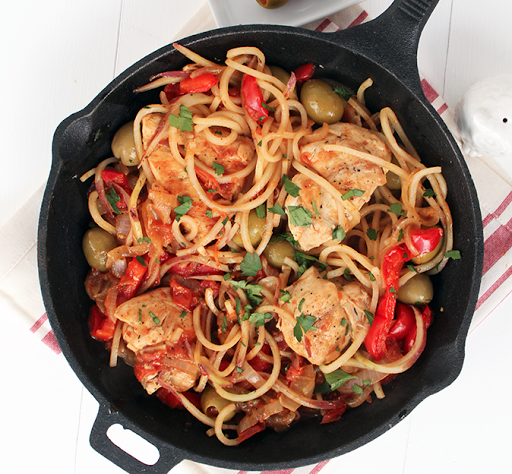 Season the chicken with salt and pepper. In a large Dutch oven or deep skillet, heat the oil over medium-high. Add in the chicken and cook for about 5 minutes or until lightly browned, turning occasionally to evenly cook.

Add in the onion, pepper and paprika, cooking 2-3 minutes or until crisp-tender. Then, add in the garlic, tomatoes, broth, red pepper flakes, thyme and season with salt. Bring to a boil and then reduce heat to a simmer, cooking covered for 5 minutes and then uncover, add in the potato noodles, toss to combine evenly and then cook another 10 minutes or until chicken is tender and potato noodles are cooked through.

Stir in the olives, garnish with parsley and serve. I transferred mine to a cast-iron skillet for presentation, but you can divide immediately into plates or serve in the Dutch oven/pot.