Melt the butter in a large, high-walled and heavy-bottomed pan over medium heat. Add the onions, garlic, bay leaf, sprig of thyme, and a sprinkle of salt and pepper and cook until the onions are soft and nearly caramelized, about 20 minutes. Add in the mushrooms (with a little more butter, if necessary), and saute until the mushrooms are soft and slightly browned and the onions have caramelized, about 5 more minutes. Discard the bay leaf and thyme and remove the onions and mushrooms to a bowl.

Heat a tablespoon of oil over medium-high, and sprinkle the steak with salt, pepper, and flour. Saute until browned, about 3 minutes. Remove the steak and set in the bowl with the mushrooms and onions.

Deglaze the pan with the red wine. Add in 1½ cups beef broth and ½ tablespoon Worcestershire sauce and bring to a low simmer. Add back in the steak, mushrooms, and onions and let simmer, covered, until the broth reduces slightly and the steak is cooked, about 8 minutes.
As you wait for the broth to reduce, cook the egg noodles according to the package. Drain and set aside.

Remove the beef mixture from the heat and add in the ⅔ cup of sour cream, stirring well. Mix in the cooked egg noodles.
Top with 1 to ½ cups grated Gruyere. If in a ovenproof pan, put under the broiler until cheese is melted and slightly browned. If not, leave the pan on the burner on medium-low, cover, and heat until cheese melts.
Top with torn parsley and serve. 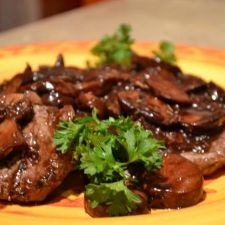