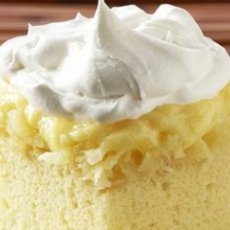 Pineapple Pudding Cake (Best cake I ever made.)

This is my favorite cake of all time.

To Start with let me say I know that this sounds daunting but it is not, I have just added so much information that it seems that way. Its really just a yellow cake mix, vanilla pudding with cream cheese in it, drained pineapple, and Cool Whip. The reason I have added so much information is because I have had these questions asked by others, some forget to use instant pudding, mix the pineapple in the pudding, etc., so I wanted to try to answer all the questions in advance.

I have made this with five cake mixes before, used a large roasting pan, with the five cake mixes let cool, leveled the cake with sewing string, placed the cake on a large cookie sheet, then cut into two layers. gently removing the first layer to put the pudding and pineapple on the first layer and then adding the second layer for the finish. Then cover with Cool Whip. Feeds at least 40 people.

My favorite way is to make it in one 12 inch (doubling the recipe) cake pan, used the same technique of leveling the cake once it is cooled, then slicing into two layers, makes a beautiful tall cake, and even people that do not like cake love this.

I have again used five cake mixes divided between 2 12 inch round pans, (only had one 12 inch pan so had to use half cake mixture for the first cake layer and then bake the second half of cake batter in the 12 inch pan again. Do not need to cut layers, use the first cake, leveled while in the pan, place on a large platter, and then pudding, pineapple, then other cake layer topping with pudding and pineapple and covering the whole thing with Cool Whip. It was worth it. Made it for a wedding dinner and it was amazing, tall and imposing. Could even tent the Cool Whip to match the wedding colors. Did this for a friend.

You could use mandarin oranges, peaches, strawberries mixed with sugar let sit for a few hours, or make the strawberry mixture the night before, and use the sauce in the cake mix.

You could use a whipped cream topping, but Cool Whip is fine and holds up better, and I use the low fat version and no one can tell the difference.

Also I make the pudding almost 2/3 of an inch thick on each layer. Do not put pudding on sides of cake. The cream cheese makes the vanilla pudding thick enough to hold up the second layer and adds richness to the pudding. It will not hold up without the cream cheese. Keep refrigerated once made. Holds up well sitting out before serving.

Make sure to use INSTANT vanilla pudding and not use any flavored pudding like banana or pineapple flavor, they taste too fake and overwhelm the lightness of the cake.

If you wish can use fresh coconut on top or even toasted coconut.


I have been making this cake for 30 years.

I have never made a better cake in my life.

I borrowed the pic from Sixsistersstuff.com. 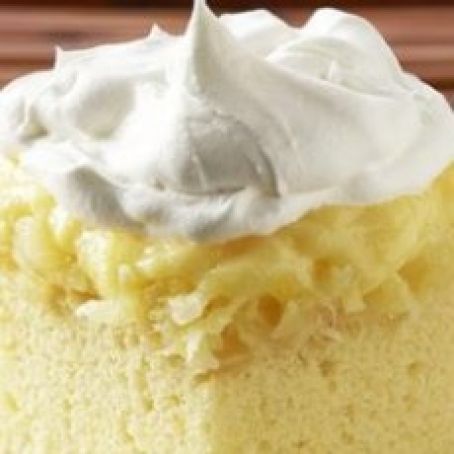 Add softened cream cheese (can warm in microwave on say 30 temp for a minute) and add the portion of warmed milk and beat well to smooth out all bumps, (if you attempt this with cold, or even room temp cream cheese you will have cream cheese lumps and the texture of the pudding will just not be a good thing.)

Chill the pudding mixture while cake is baking and cooling.

Make cake batter according to package directions using pineapple juice reserved from crushed pineapple in place of most of the water. If the pineapple juice does not equal the liquid you need for the recipe then add water to the juice to comply.

Bake at 350°F for 35 minutes or until toothpick or long piece or uncooked spaghetti inserted near the center comes out clean.

Sprinkle well-drained pineapple over pudding. If making two layers, use half the pineapple on the first layer the rest on the next layer.

Cover the whole thing with thick dollops of Cool Whip, don't try to just spread it on for the top, use the dollop method. then smooth together - cover the whole cake if cooked in round cake pans, that means the sides with the Cool Whip seals in and keeps the cake moist.

Chill cake for about 4 hours or until ready to serve. Best if made the night before so the flavors can meld.

Be careful, if you make a large batch, will be heavy put on a sturdy pan or platter.

Repeat: I know that this sounds daunting but it is not, I have just added so much information that it seems that way. It's really just a yellow cake mix, vanilla pudding with cream cheese, drained pineapple, and Cool Whip.


Dedicated to Julie, Cookie, and Beverly, my amazing sisters. 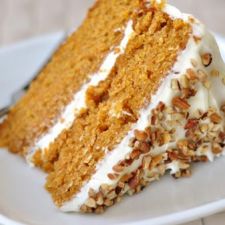