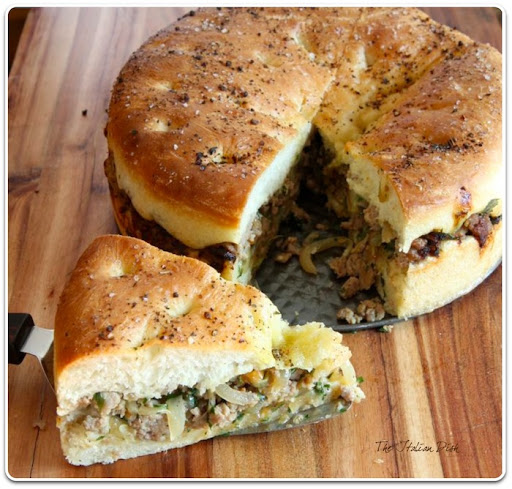 You will need a 9" spring form pan for this recipe 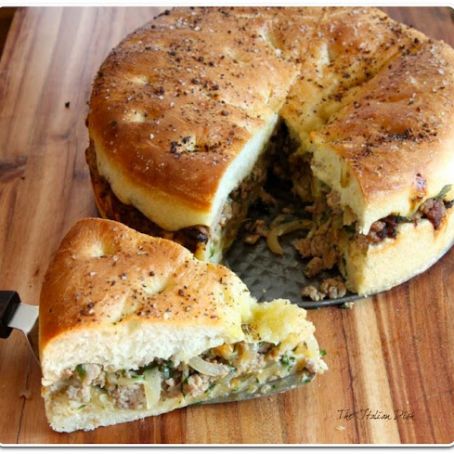 To make the sponge:

Sprinkle the yeast over the warm water in a large bowl (I use the mixer bowl of my KitchenAid mixer) and stir in the flour. Cover with plastic wrap and let rise in a warm place until doubled and bubbly, about 45 minutes.

To make the dough:
Add the yeast, water and the olive oil to the sponge in the mixer bowl. With the dough hook running, add just under 3 cups of the flour and salt and mix thoroughly. The dough should come together in a ball in the mixer bowl and then start sticking to the sides of the bowl. When this happens, add flour by the spoonful and mix again. Each time if you see the dough is still sticking to the sides of the bowl, keep adding flour until the dough isn't real sticky anymore, but not dry. Stop the mixer and touch the dough with your finger. When it is smooth and elastic and not too sticky, it's done. Place the dough in a clean bowl that you have drizzled with a little olive oil. Roll the dough to coat in the olive oil, wrap tightly with plastic wrap and let rise in a warm place until doubled, about 1.25 hours.

Meanwhile, make the stuffing. In a large skillet, brown the sausage and cook all the way through. Remove from pan and drain any fat, but don't wipe out pan. Add 2 tablespoons olive oil to the pan and add the onions and hot pepper with 1 teaspoon of salt and lots of freshly ground pepper. Cook over medium-low heat for about 10 minutes, until onions are nicely wilted. Add garlic and cook for two minutes. Return sausage to the pan. Remove from heat and transfer to a large bowl to cool slightly. Add parsley and cheese and toss together. Let the stuffing stay at room temperature until dough is ready - you don't want to refrigerate the stuffing and let it get cold.
Second Rise:
Punch dough down. Divide in half. Lightly oil (or spray with nonstick spray) a 9-inch springform pan. Stretch half of the dough into a disc and place in the bottom of the pan. Spoon stuffing mixture into pan. Stretch the other piece of dough into a disc and place on top of stuffing. Place a clean towel over the bread and let rise in a warm place for about 30 minutes. Meanwhile, preheat oven to 425 F degrees.divide dough in half and place one piece in bottom of a cheesecake pan.
fill with stuffing, add rest of dough and sprinkle with toppings
Just before baking, dimple the dough with your fingers, leaving indentations. Drizzle olive oil over the dough, brush lightly to coat, and sprinkle with salt. Add any other topping spices that you like - I like to add some oregano, chili flakes, ground pepper.

Bake for 30 - 35 minutes until the top is deep golden brown. To serve, slice into wedges and eat like a sandwich.

This bread is great the next day. Simply place on a pan in the oven at 375 and bake for about 15 minutes, or until warmed through. We've made three meals out of one stuffed focaccia! 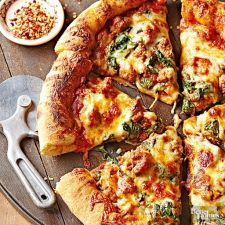