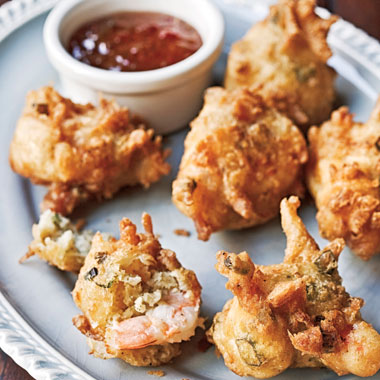 Crispy fried shrimp beignets in a pepper jelly sauce that you won't be able to put down! Perfect for an appetizer or party snack. 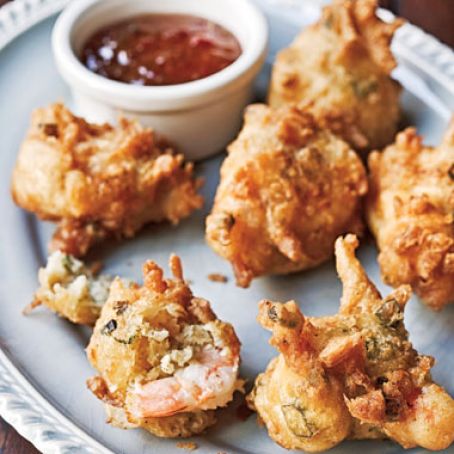 Fill a heavy, deep saucepan with at least 6 inches of oil. Heat the oil over medium-high heat until it registers 340°F on a deep-fry thermometer.

SAUCE:
Combine the jelly, mustard, and vinegar; whisk until smooth and chill until needed (this can be made 1 day in advance).

BATTER:
In a large bowl, combine the flour, coconut, baking powder, salt, cayenne pepper, and green onions. Whisk the ingredients together thoroughly and make a well in the center.

Slowly pour the beer into the well, whisking from the inside to the outside until the mixture has the consistency of pancake batter. If it's not, thin it with a touch of water.

Line a plate with paper towels and have ready. Fold the shrimp into the batter. Using 2 tablespoons, carefully scoop one batter-coated shrimp into one spoon, and with the other spoon, push the mixture into the hot oil (be careful not to splash the oil). For best results, fry no more than four beignets at a time. Using a slotted spoon, turn the beignets to cook 1 minute per side, until puffy and light brown all over. With a slotted spoon, remove the beignets from the oil and let drain on the prepared plate.

To serve, season with salt and accompany with the sauce.

Reprinted with permission from Southern Comfort: A New Take on the Recipes We Grew Up With by Allison Vines-Rushing and Slade Rushing, © 2012. Published by Ten Speed Press, a division of Random House, Inc.

Allison Vines-Rushing and Slade Rushing burst onto the culinary scene in 2003 as chefs of Jack's Luxury Oyster Bar, which the New York Times called "one of the most distinctive new restaurants to come along in years" and earned Allison the 2004 James Beard Rising Star award. In 2005, the couple returned to Louisiana to open Longbranch followed by MiLa in New Orleans in 2007. 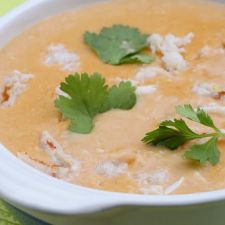