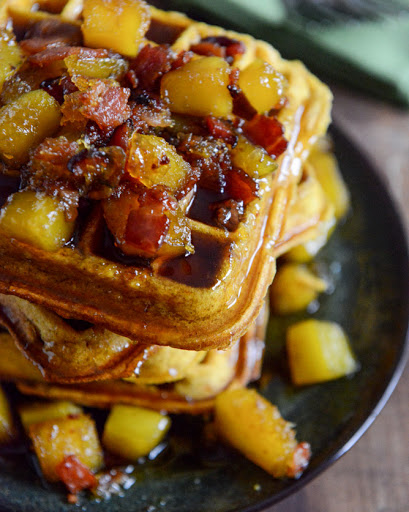 If you're looking for a unique and yummy breakfast to make at home, these delicious pumpkin waffles with butternut and bacon syrup are definitely for you! The delicious syrup is definitely what makes the recipe, in my opinion. 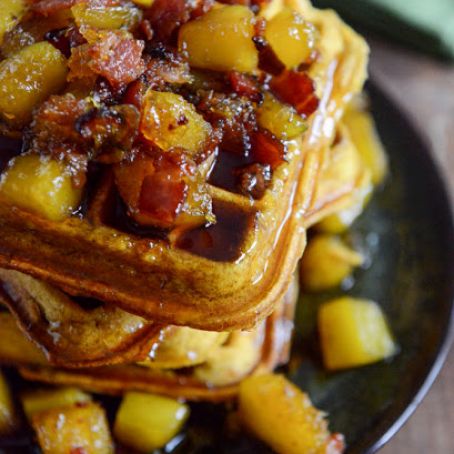 Prep the syrup first. Heat a large skillet over medium heat and add the chopped bacon. Once the fat is rendered and the bacon starts to crisp, add in the butternut squash and stir. Cover the skillet, reduce the heat to medium-low and cook until the squash is fork tender and begins to caramelize, about 10 minutes. Stir once or twice in between - you do not want the squash to become mushy! Add in the syrup and bring the mixture to a boil. Once boiling, turn off the heat and cover the syrup until ready to use.

To make the waffles, combine the flours, 2 tablespoons of sugar, baking powder, pumpkin spice and salt in a large bowl and whisk together. Set it aside. Separate the eggs, and add the egg whites to the bowl of an electric mixer. Beat on medium-high speed until stiff peaks form. Beat in the remaining sugar. Set the eggs whites aside for a minute.

In a bowl, whisk together the egg yolks, milk, pumpkin and coconut oil. Add the wet ingredients to the dry and stir until just combined - do not overmix. Finally, fold in the whipped egg whites until the batter comes together. Preheat your waffle iron to the desired setting and cook the waffles according to your appliance's directions. Serve them immediately with the warm bacon + butternut syrup. 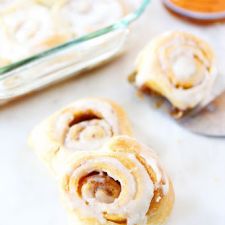