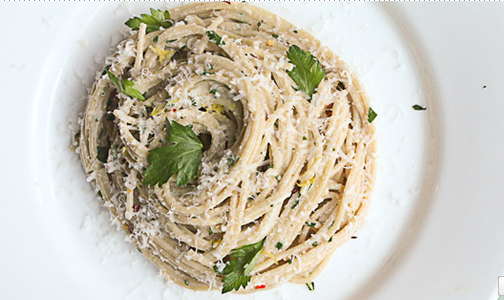 When Bluebeard’s co-chefs Abbi and John Adams (yes, they’re linked by cooking and matrimony) shared the recipe for their most popular pasta dish, they warned us that it’s so intensely crave-able that their regulars would stage a riot if they took it off the menu. After devouring the beautifully sauced spaghetti, we feel precisely the same way. At the contemporary Italian restaurant, the Indianapolis chefs dress pasta in a slightly tangy crème fraîche sauce that recalls a light and, dare we say, sexy Alfredo. Whether you serve it solo or topped with seared scallops or roasted chicken breast, we guarantee this spaghetti will have your dinnertime regulars just as excited. 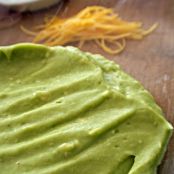 1. Make the gremolata: In a small bowl, combine the parsley with the garlic and lemon zest. Using a spatula or small spoon, mix until just combined and set aside. (You should have about ¼ cup.)

2. Make the spaghetti: Bring a large pot of salted water to a boil. Add the spaghetti and cook until al dente, according to the package instructions or about 8 minutes.

3. Meanwhile, in a large bowl, whisk the crème fraîche with the olive oil and lemon juice until combined. Add the Parmesan, red-pepper flakes and reserved gremolata; mix until combined.

4. When the spaghetti is cooked, use tongs to transfer it directly to the bowl with the sauce. Toss the spaghetti until the sauce coats the noodles evenly, adding pasta water 1 tablespoon at a time to thin the sauce if needed. Season to taste with salt and pepper.

5. Transfer the spaghetti to a large serving bowl or divide among four plates. Garnish the spaghetti with additional Parmesan, a drizzle of olive oil and the whole parsley leaves. Serve immediately. 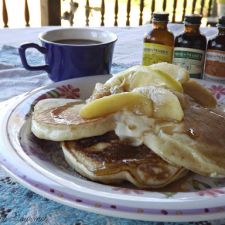