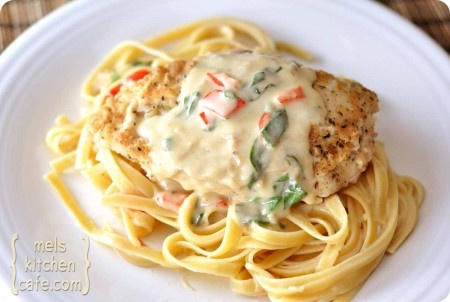 Admittedly, I’ve never actually ordered or eaten the Tuscan Garlic Chicken at Olive Garden but this knock-off recipe certainly made me think that if I could make something this delicious at home, there isn’t any reason to pay an arm and a leg for it at the ol’ O and G. 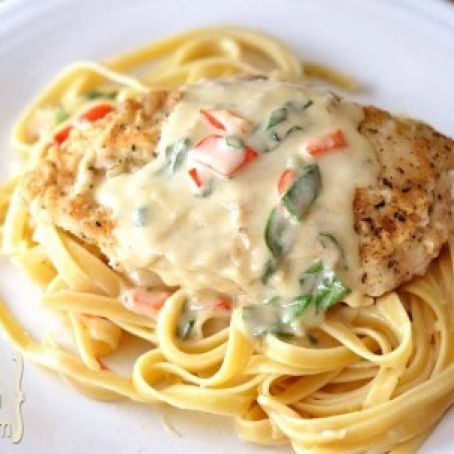 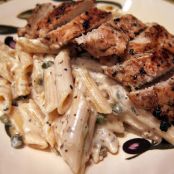 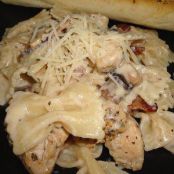 In a shallow pie plate or similar dish, combine the flour, salt, pepper, basil and oregano. Dip each chicken piece in the flour mixture until both sides are well coated.

In a large 12-inch nonstick skillet, heat 3 tablespoons of the olive oil over medium heat until the oil is hot and shimmering.

Carefully place the chicken breasts in the pan, cooking them for 2-3 minutes on each side, until they are golden and browned but not cooked all the way through (they’ll finish up in the oven).

Don’t scoot the chicken around once you lay it in the hot oil! Let the oil work it’s magic to sear the crust on the chicken. If you get antsy and try flipping too early and/or moving the chicken around the pan, the breading is likely to fall off. Gently remove the chicken to a foil-lined, lightly greased baking sheet and bake in the preheated oven for about 15 minutes, until the chicken is cooked through. Set aside and tent with foil until ready to use.

While the chicken is cooking, heat a large pot of water to a boil and add the noodles, cooking until al dente. Also, wipe out the skillet with a couple paper towels and return it to medium heat, adding the remaining 2 tablespoons olive oil. When the oil is hot, add the garlic and bell pepper, sauteing for 2-3 minutes.

Stir in one tablespoon flour and stir constantly while cooking for another minute. Add the chicken broth to the skillet and bring the mixture to a low simmer, whisking constantly, until slightly thickened, about 3-4 minutes.

In a small liquid measure, whisk together the cornstarch and cream. Add the spinach, milk and cream mixture to the skillet. Bring the mixture to a simmer and cook, stirring occasionally, until the spinach is wilted and sauce is slightly thickened, about 2-4 minutes. Stir in the Parmesan cheese.

When the pasta has finished cooking, drain and return it to the pot. Toss the pasta with half of the cheese sauce. Place some of the coated pasta on each plate. Top with a breaded chicken breast and spoon some of the sauce over the top of the chicken and pasta. Serve immediately. 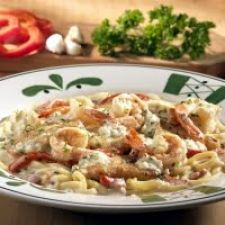