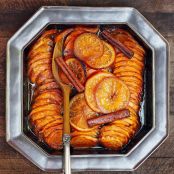 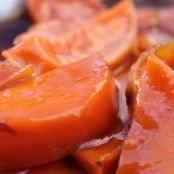 The Best Ever Candied Yams

To bake all of stuffing in baking dish: Preheat oven to 350 degrees. Generously butter 15- by 10- by 2-inch glass baking dish, depending on recipe. Add enough extra broth to stuffing to moisten (3/4 cup to 1 1/4 cups). Transfer stuffing to prepared dish. Cover with buttered foil, buttered-side down. Bake until heated through, about 40 minutes. Uncover and bake until top is slightly crisp and golden, about 20 minutes longer.

This recipe yields 12 to 14 servings.