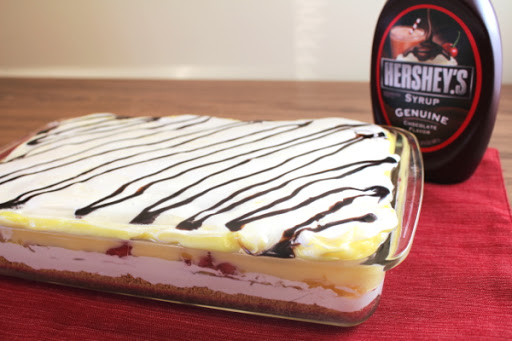 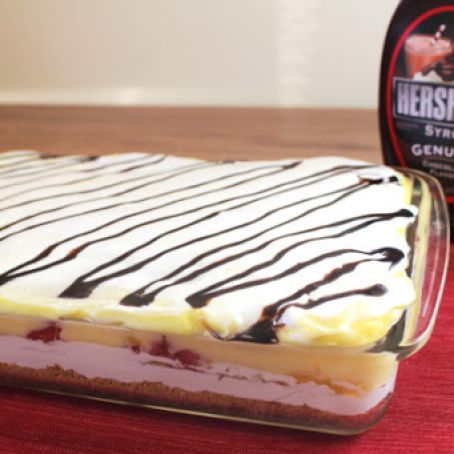 Grease a 9×13-inch baking dish; set aside.
In a medium bowl, combine the graham cracker or Oreo crumbs and melted butter. Stir the mixture until it’s evenly moist. Then, dump the crumbs into your baking dish and press them into an even layer. Then, place the baking dish into your refrigerator until you've prepared your next layer.
In another medium bowl, combine the cream cheese, sugar, 2 T of milk, and vanilla with a hand mixer on a medium speed. Mix together until fluffy and light. Then, using a rubber spatula, completely mix in 8 ounces of the Cool Whip. Once the mixture is completely combined, remove your baking dish from your refrigerator and evenly spread the cream cheese mixture on top of the graham cracker crust.
Pour your drained strawberries and pineapple on top of the cream cheese mixture and spread it evenly. It doesn't matter which fruit you put in first.
Mix the two boxes of banana cream instant pudding with 3 1/2 cups of cold milk. Whisk for a few minutes until the pudding starts to thicken. Then, use a rubber spatula to spread the pudding over the fruit layer. Let the dessert sit for about 5 minutes so that the pudding can firm up a bit more.
Spread the remaining 8 ounces of Cool Whip over the top of the dessert as evenly as possible. Drizzle (or pour, your choice) the chocolate syrup on top of the Cool Whip layer. Allow the dessert to chill in the refrigerator for at least 4 hours before serving or overnight.

You may end up having more of the cream cheese mixture than you need, depending on the exact size of your dish. If you do have extra, it makes for a delicious fruit dip.

To make sure the pineapple and strawberries are drained well, try running water over them while they’re in a colander or strainer. Its an easy way of removing the juices they’re packaged in.