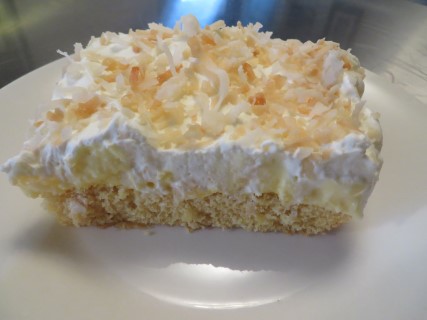 A creamy 3 layer Dessert with hints of Pineapple and topped with Toasted Coconut.

1. Make the Cake Mix according to package directions EXCEPT pour the batter into TWO 9 x 13 pans. Spread the batter out evenly. Don’t worry, the batter will rise and this is only the bottom layer of our Dessert so we need to have room for the next two layers. The baking time will most likely be much less than stated on the package since we are using two pans. Mine took about 17 minutes. Check for doneness at about the 10 minute mark and then check every 5 minutes or so.

2. When the Cakes are done, allow them to cool completely.

3. Wait, don’t turn the oven off just yet. Spread the Coconut out on a 9 x 13 baking sheet and pop it into the already preheated oven. Stir it often and bake just until toasted. Watch closely, once the Coconut starts to get golden brown it can burn quickly so air on the side of caution and remove it as soon as it gets that toasty color. Set the Toasted Coconut aside an allow it to cool.

4. In a large mixing bowl, add the Pudding Mixes, Coconut Extract and Milk. With a hand mixer blend for about 2 minutes. Next add in the Cream Cheese and mix until all ingredients are well combined and smooth.


5. With a spatula, fold in the drained Pineapple.

6. Spread the Filling evenly over the 2 cakes.

7. With a handheld mixer whip the Cream and Sugar until stiff peaks form. Spread the Whipping Cream evenly in the two pans over the top of the filling layer.

8. Now sprinkle the cooled Toasted Coconut over the top of the Whipped Cream layer in both pans.

9. Cover the pans tightly and refrigerate for at least 2 hours. After the Desserts have chilled, slice and serve!

~Store any leftovers in the refrigerator. 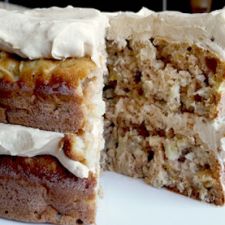