1. Heat oven to 160C/fan 140C/gas 3. Pat the beef dry with kitchen paper and season both sides. Thinly slice the onions. Pour 600ml boiling water over the dried mushrooms. Soak for 30 mins, then drain, reserving the juices.
2. Heat 2 tbsp of the oil in a large, flameproof casserole, then add the meat and fry on both sides until browned. you may need to do this in batches. Remove the meat from the pan, pour in the remaining oil, then add the onions and fry for 10 mins until softened and lightly browned. Return the meat to the pan, sprinkle in the flour and cook for 1 min.
3. Add the port, mushroom liquid and soaked mushrooms. Bring to the boil, season, then cover tightly and cook in the oven for 1½-2 hrs until the meat is tender. Check after 1 hr and give it a stir. If the sauce looks like it's getting too thick, add a splash of boiling water.
4. Taste and add more seasoning if necessary, then add the chestnut mushrooms and cook for a further 10 mins.

Freeze at the end of step 3. Defrost overnight in the fridge, then bring to the boil, before reducing the heat and stirring in the chestnut mushrooms. Simmer for 15 mins until heated through.
Per serving 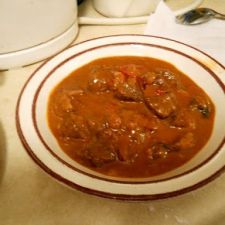