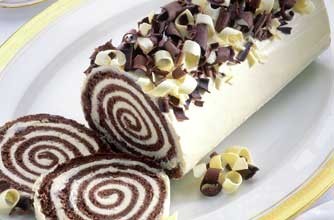 Impress your family and friends with this intricate recipe for Mary Berry's Manhattan Roulade, a beautiful chocolate cake rolled with buttercream icing. 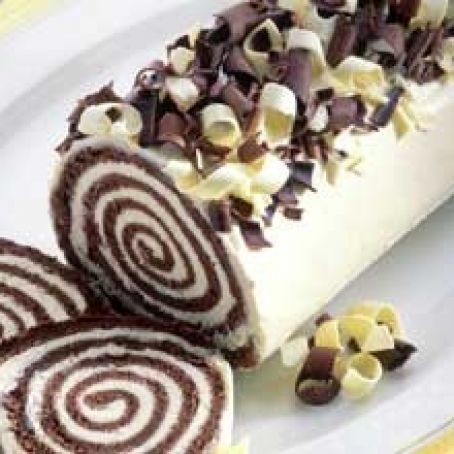 In a large bowl, with an electric mixer on full speed, beat the egg whites until soft peaks form. Gradually sprinkle in 75 grams (2 1/2 ounces) sugar, beating until the sugar completely dissolves and the whites stand in stiff peaks.

In another large bowl, using an electric mixer, beat the egg yolks and remaining sugar until very thick and lemon-colored. Add the flour and cocoa. Beat until well mixed, occasionally scraping the bowl with a rubber spatula. With a rubber spatula or wire whisk, gently fold the beaten egg whites into the egg yolk and sugar mixture, one third at a time.

Spoon the mixture into tins, spreading evenly. Bake for 8-10 minutes or until the tops of the cakes spring back when lightly touched with your finger.

Sift the cocoa over 2 clean tea towels. When the cakes are done, immediately turn the cakes out onto the towels.
Carefully peel the baking parchment off the cakes. If you like, cut off the crisp edges. Starting at a narrow end of each cake, roll cakes with towels, Swiss roll-style. Place the cake rolls, seam-side down, on wire racks and leave to cool completely.

Meanwhile, prepare the white chocolate butter cream. In a small, heavy saucepan, heat 3 tablespoons of milk over a medium heat until tiny bubbles form around the edge of the pan. Remove the saucepan from the heat.

Using a wire whisk, beat in the chopped white chocolate. Mix until the chocolate melts then stir in the coffee liqueur. Cool, then refrigerate until cold for about 30 mins, stirring occasionally.

Place the icing sugar and softened butter in a large bowl. (Don't use margarine as the butter cream will separate). Using an electric mixer, beat for 10 minutes or until light and fluffy, scraping the bowl often with a rubber spatula.

Gradually beat the white chocolate mixture into the butter cream until smooth, occasionally scraping the bowl with the spatula.

Cook's tip: When cutting roulade, it's important to slice it cleanly so that the filling is seen at its best. For perfect results, dip a long serrated knife in hot water before slicing. Wipe the blade with kitchen paper after cutting each slice and dip again in water. 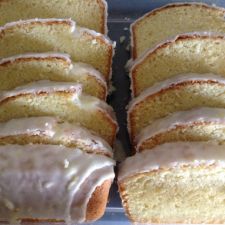