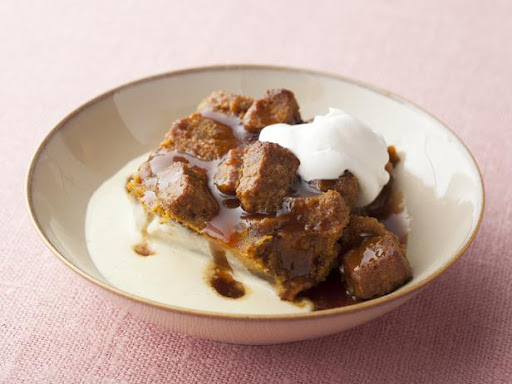 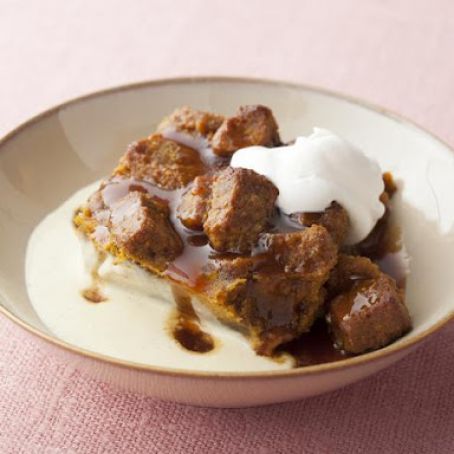 Preheat the oven to 325 degrees F. Combine the cream, milk, vanilla bean and seeds in a small saucepan over medium heat and bring to a simmer.

Whisk together the yolks, sugar, maple syrup, and pumpkin puree in a large bowl. Slowly whisk in the hot cream mixture until combined, remove the vanilla pod, and whisk in the bourbon. Strain the custard into a clean bowl.

Scatter the pumpkin bread cubes in a buttered 9 by 13-inch baking glass baking dish. Pour the custard over the bread, pressing down on the bread to totally submerge it in the custard. Let sit for 15 minutes to allow the bread to soak up some of the custard.

Place the pan in a larger roasting pan and pour hot tap water into the roasting pan until it comes half way up the sides of the glass dish. Bake until the sides are slightly puffed and the center jiggles slightly, about 1 hour.

Remove from the oven and water bath and cool on a baking rack for at least 30 minutes before serving.

Spoon some of the Vanilla Bean Creme Anglaise into a shallow bowl, top with some of the bread pudding and drizzle with the Spicy Caramel Apple Sauce. Top with freshly whipped cream. Bread pudding is best served warm.

Preheat the oven to 350 degrees F. Butter or lightly spray the bottom and sides of a 9-inch loaf pan with nonstick cooking spray.

In the bowl of a standing mixer fitted with the paddle attachment, beat the 4 tablespoons softened butter, sugar, and oil at high speed until light and fluffy, about 1 minute, scraping down the sides and bottom of the bowl a few times.

Add the pumpkin puree and mix until combined. Add the eggs, one at a time, and mix until just incorporated. At low speed, slowly add the flour mixture and water and mix until just combined. Spread the batter into the prepared pan and bake until a toothpick inserted into the center comes out clean, about 60 to 75 minutes. Let cool in the pan on a baking rack for 10 minutes. Remove from the pan and let cool completely.

Once the bread is cool, slice in half lengthwise, and then slice each half into 1/2-inch cubes. Spread the cubes on a large baking sheet and bake in a 325 degree oven until lightly toasted, turning once, about 20 minutes. Let cool.

Bring the half-and-half and vanilla bean and seeds to a simmer in a medium saucepan.

Whisk together the yolks and sugar in a medium bowl until at the pale ribbon stage. Slowly whisk in the hot half-and-half, return the mixture to the pot, and cook over medium heat, stirring constantly with a wooden spoon, until the mixture coats the back of the spoon. Strain into a bowl and set over an ice bath. Stir until chilled. Cover and refrigerate at least 1 hour before serving.

Combine the cream, apple juice, star anise, ginger, cloves, cinnamon sticks, and nutmeg in a small saucepan and bring to a simmer. Remove from the heat and let steep for at least 20 minutes. Strain the mixture into a clean, small saucepan and place back over low heat while you make the caramel.

Combine the sugar, water and, vinegar in a medium saucepan over high heat and cook without stirring, until it's a deep amber color, about 8 minutes. Slowly whisk in the warm cream mixture a little at a time, and continue whisking until smooth. Add the apple schnapps and cook for 30 seconds longer. Transfer to a bowl and keep warm. The sauce can be made 2 days in advance and refrigerated. Reheat over low heat before serving.