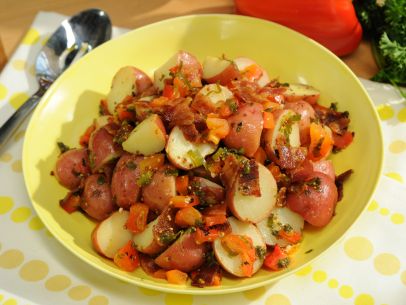 Scrumptious side dish! I'll definitely be making this again. Love that you can serve it warm or cold and pretty much compliments any main dish. 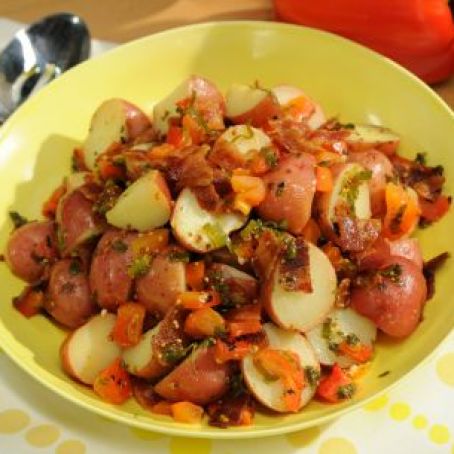 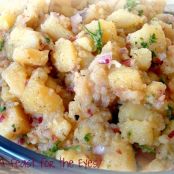 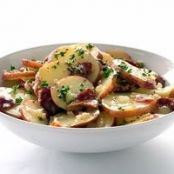 In a large pot, add the potatoes, garlic, a nice pinch of salt, a few grinds of pepper and water to just cover. Bring to a boil, then lower to a simmer. Cook until the potatoes are fork-tender all the way through, about 15 minutes. Drain in a colander and rest the colander over the top of the empty pot to allow the heat to dry the potatoes. Once cool enough to handle but still warm, cut the larger potatoes in quarters and the others in half to make all the same general bite size. Some may not need to be cut at all. Add to a large mixing bowl.

If using a gas stove, place the pepper directly over a medium flame and allow to char on one side, then rotate until the entire pepper is black and charred. If you don't have a gas stove, roast the pepper on a baking sheet under the broiler or at the highest temperature of your oven. Carefully watch to rotate the pepper and char on all sides. Remove to a resealable plastic bag and close, allowing it to steam for 5 minutes to loosen the skin. Once cool enough to handle, remove the seeds and charred skin and chop the pepper. Set aside.

In a large pan on medium heat, add the bacon and cook, stirring, until crisp, about 8 minutes. Remove with a slotted spoon to a plate, leaving the fat in the pan. Add the vinegar, sugar, mustard, paprika, a pinch of salt and a few grinds of pepper to the still-hot pan. Cook at a rolling simmer until the sugar and salt dissolve, about 2 minutes. Add the potatoes and toss until they soak up the vinegar mixture.

Transfer the potatoes back to the large bowl. Add the red peppers, bacon, parsley and scallions and toss. Pour into a serving bowl and serve warm or cold. 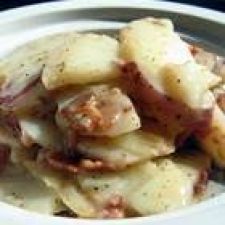