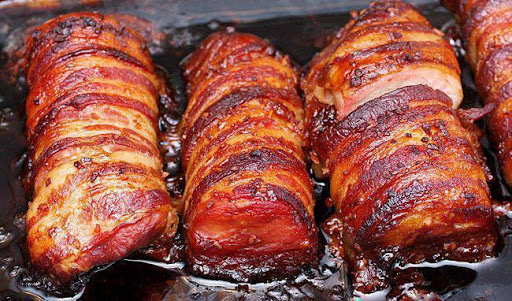 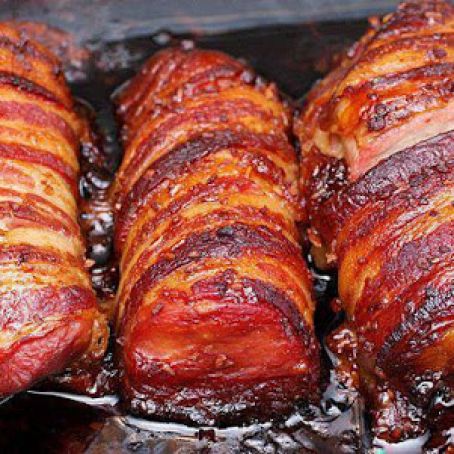 Place 2 overlapping sheets of plastic wrap that are a few inches longer than the tenderloin on a work surface. Place the roast in the center of the plastic wrap. Season with salt and pepper; sprinkle the rosemary.

Cooking note: Most tenderloins this size are tied with butcher’s twine. Remove the twine before seasoning the roast and wrapping it in the bacon.

Use the remaining slices to finish wrapping the roast, overlapping each slightly.

Pull up the plastic wrap around the roast to cover it completely and to ho ld the bacon in place. Transfer to a large baking sheet and refrigerate for at least 1 hour.

Preheat the oven to 425 degrees F.
Lay the roast on a large cutting board; remove the plastic wrap and cut the roast crosswise down the middle into 2 equal pieces. Add the oil to a large cast iron skillet and warm it over medium heat. Add one of the wrapped tenderloins, seam side down …

Cooking note: The bacon will not brown and crisp much more after you put the tenderloin into the oven to finish cooking. So, brown thoroughly at this stage, but without allowing the bacon to burn. Use tongs to turn the roast and keep adjusting the heat. You want the bacon to sizzle, so that it browns fairly quickly without burning.

When it’s fully browned the roast will look like this …

Transfer the tenderloin to a large roasting rack set over a roasting pan. Pour off all but about 1 tablespoon of the fat in the skillet. (You can pour it into a jar, as our grandmother’s did, to save for later use. Be sure to refrigerate.) Set the skillet over medium heat and add the remaining tenderloin, seam side down. Repeat the browning process.

Transfer the tenderloin to the roasting rack alongside the other roast, and place in the preheated oven. Roast each until an instant-read thermometer inserted into the center registers 130 to 135 degrees F for medium rare, 20 to 25 minutes.

Let the roasts rest, loosely covered with foil, about 10 minutes before carving.

To carve, transfer the roasts to a carving board and cut into slices each about 1-inch thick …