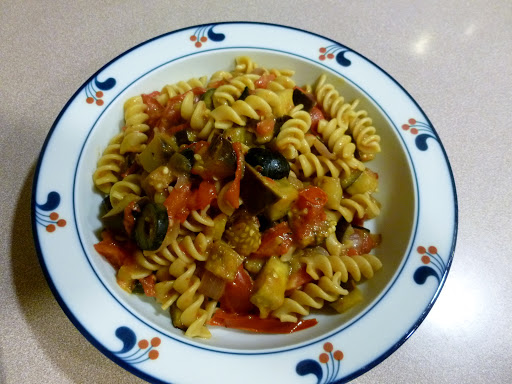 Found a recipe similar to this in a book in the kitchen of a house we rented at the Outer Banks in May 2013. We made it there and as close to it again at home with just the ingredient list! I leave out the Romano and Parmesan cheeses and use vegan cream cheese instead of ricotta to make it vegan. 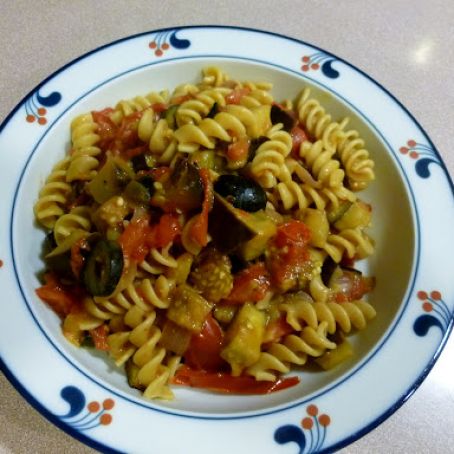 Peel the eggplant (I don't!) and cut into cubes of about 1/2". Put in a bowl and toss with a handful of salt. Let it sit for about an hour, then drain off the liquid, rinse well and pat dry with paper toweling.

Heat the oil in the pan and fry the eggplant until it is golden. Remove the eggplant with a slotted spoon and place in a bowl lined with paper towels to absorb the oil. Discard all but enough of the remaining oil to sauté the onions.

Bring the water for the spaghetti to a boil and cook according to the package directions.

While the pasta is cooking, sauté the onions and garlic until onions are translucent. Return the eggplant to the pan along with the tomatoes, romano cheese (if using), and ricotta (or substitute). Season with pepper. Cook until the ricotta is melded with the vegetables.

Drain the pasta. Serve on individual plates with the eggplant mixture spooned over it. Top with chiffonade of basil and pass the Parmesan cheese around the table, if desired. 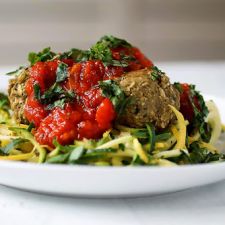