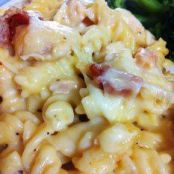 In a large pot of boiling water, cook the elbow macaroni until al dente. Drain thoroughly and set aside.

Melt 1 tablespoon of the butter in a large skillet over medium heat. Add sausage and cook, stirring, until browned. Remove sausage from pan and set aside.

Melt remaining 3 tablespoons of butter in the pan. Add onions and cook, stirring, until soft. Stir in flour and cook until bubbly. Remove from the heat and slowly add the milk. Return to the heat and cook, stirring until the sauce starts to boil and begins to thicken. Remove from heat and stir in the caraway seeds,white pepper and drained macaroni. Stir until well mixed. Season to taste with salt and pepper.

Bake, uncovered, in a 400 degree oven until cheese is bubbly and the center of the casserole is hot, about 25 minutes.