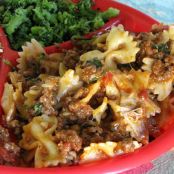 Combine mushrooms, wine, garlic, thyme, salt, and pepper in a saucepan and bring to a boil. Reduce the heat and simmer, uncovered, for 10 to 12 minutes or until the mushrooms are tender and no liquid remains. Remove from heat. Remove 1/2 cup of the mixture, leaving the remaining mixture in the saucepan.

Finely chop the 1/2 cup mushroom mixture. Stir the chopped mixture with ricotta cheese, Parmesan cheese, and chives, then set aside.

Divide the dough into two portions. Roll each portion on a floured surface into a rectangle about 12 by 9 inches. If using a pasta machine, pass the dough through until it's 1/16-inch thick, dusting with additional flour if necessary to prevent sticking. Using a pastry wheel, cut the dough into 2-inch wide strips.

Place about 1 1/2 teaspoons of the filling at 2-inch intervals down the center of half of the strips. Use a pastry brush to brush water onto the dough around the mounds of filling. Carefully place a second sheet of dough on top of the first. Using the side of your hand, press the pasta around each mound of filling so the two sheets of moistened dough will stick to one another. Using a fluted pastry wheel, cut the pastry between the mounds of filling.

Arrange individual raviolis in a single layer on a floured surface until they're ready to cook. Cook the ravioli for 6 to 8 minutes in a 4-quart pot of boiling, lightly salted water. Drain.

To make the sauce, stir together the evaporated skim milk and 1 tablespoon of flour. Add to the remaining mushroom mixture. Cook and stir until thickened and bubbly. Cook, stirring constantly, 1 minute more. Arrange the ravioli on appetizer plates. Top with the sauce.

For the Ravioli Dough: Stir together 1 cup of all-purpose flour and 1/4 teaspoon of salt in a medium mixing bowl. Push the mixture against the edge of the mixing bowl, making a well in the center. In a separate bowl, stir together 1 beaten egg, 2 tablespoons of water, and 1 teaspoon of olive oil. Add the egg mixture all at once to the well in the center of the flour mixture. Stir lightly with a fork until well-combined. Form the dough into a ball. Turn out onto a floured surface, kneading the dough until its smooth and elastic. This should take 8 to 10 minutes. Cover and let rest for 10 minutes.

For Parsleyed Ravioli Dough: Those wanting to go to some extra trouble for a special presentation may be interested in "layering" their ravioli dough with fresh parsley leaves. To do so, moisten a piece of 1/16-inch thick dough with water. Place Italian parsley leaves on top of the dough, spacing them 1 to 2 inches apart. Place another layer of 1/16-inch thick dough on top of the first piece. Roll again until the dough is 1/16-inch thick. Continue as directed in the recipe. The parsley pattern will be "trapped" between the two layers of dough, and will show through beautifully.