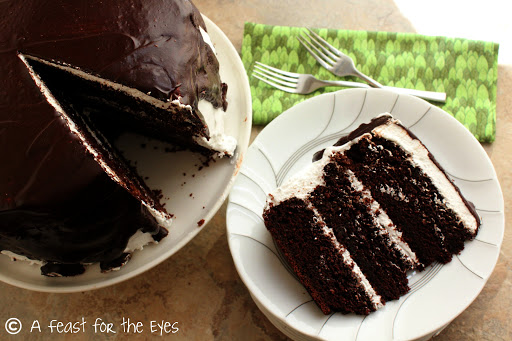 This recipe name is a mouthful, right? I was dubious that Guinness beer would work in a chocolate cake. I will never doubt that again! The cake turns out super moist with a very tender crumb. There is no beer after taste. Instead the chocolate flavor is intensified. The Italian meringue isn't difficult to make at all, and has a billowy marshmallow like texture. It's a beautiful contrast to the chocolate cake. If you love Dark Chocolate, then the Ganache sits crowns the cake with a perfect touch. This cake is very tall, and makes a beautiful statement when you serve it at a dinner party or for a special birthday. It's not hard to make at all, but it looks like a professional bakery made it. Thanks to the food blog "My Man's Belly" for sharing this recipe so that I could, too. 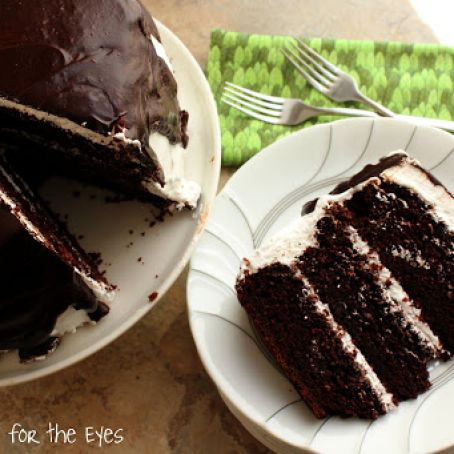 On the stove, pour 2 cups of Guinness beer, to the butter in a large saucepan and bring to a simmer over medium heat.

Once simmering, gradually whisk in the cocoa powder (add the cocoa in increments to help it to whisk to lump-free).

Remove from heat and let cool a bit.

In a stand mixer, beat the eggs and sour cream until they just come together.

Add the warm stout mixture to the egg mixture and beat until just combined.

Add flour mixture, in increments, and beat briefly on slow speed until just barely combined. (This makes A LOT of batter.)

Using a spatula, fold the batter until everything is completely combined.

Divide batter equally among prepared pans. Bake cakes until tester inserted into center of cakes comes out clean. Using three 9-inch pans, the cakes were baked in 30 minutes. Add up to 50 minutes time, if you use two pans. Just watch closely, so you don't over bake.

Allow the cakes to cool for 10 minutes, while resting on top of cake racks, then turn the cakes out onto the racks and let cool completely.

Prepare the simple syrup by bringing the sugar, and water to a simmer in a heavy saucepan. Swirl the pan to dissolve the sugar completely. Using a candy thermometer, bring the temperature to 234 - 240°F (soft ball stage). Do not stir the mixture.

Meanwhile: Beat the egg whites at slow speed until they foam throughout the bowl.

Add the salt and cream of tartar.

While the mixer is still on slow, slowly (and carefully) pour the boiling syrup down the side of the mixing bowl (be careful not to pour it on the whisk).

Increase the mixer speed to moderately fast and beat until cool and the egg whites form stiff, shiny peaks.

Finely chop the chocolate and place into a large, heat resistant bowl.

Heat the cream, in small heavy saucepan, over medium heat until bubbles begin to form around the edges.

Pour half of the cream over the chocolate and let sit for 30 seconds.

Pour in the rest of the warm cream. Continue whisking until all of the chocolate has melted. Set chocolate ganache aside.

If you used three 9-inch pans, you won't have to cut any layers in half. If you used two pans, you will need to carefully cut each layer. To do this, I use a rotating cake stand. Gently insert a serrated knife and slowly begin spinning the cake stand. Make sure that your cake layers are even.

I like to tear four thin strips of waxed paper, and set them on the cake stand. Then, set your first layer on top.

I don't measure how much icing to use, but I plop a mound of frosting on the first layer-- carefully gauging that I leave enough to finish frosting the cake. An off-set spatula helps to evenly spread the frosting all over. Don't worry if the frosting overflows the edge. You can incorporate that over the sides of the cake.

Continue frosting the middle layer. For the last layer, spoon the rest of the frosting on top, and then the sides. Don't worry, too much, about making the frosting look perfect. You will be adding the ganache on top, so it will hide any imperfections.


Re-whisk the ganache and pour it into a pitcher or measuring cup with a spout, to make pouring easier). The temperature of the ganache shouldn't be scalding hot-- you want it warm enough so that it's pourable, but can't melt the meringue.

As you get closer to the edge, you'll push the excess over the sides and form the drips.

Use any leftover ganache to pour more on top and gently push the excess over the edge to form more drips.

Let stand for a couple of hours, in a refrigerator is best, so that the ganache has time to set up.

IMPORTANT: Any leftover cake should be refrigerated. The meringue will slowly deflate, after a day, and will be reabsorbed into the cake. This is important only IF there's any leftovers! 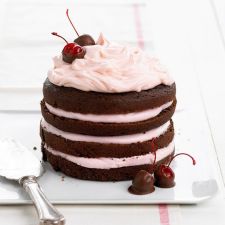