Spread the cornbread cubes in a single layer on 2 rimmed baking sheets
and allow to air-dry overnight, stirring occasionally. Transfer to a large
mixing bowl. Add the pecans.
Butter a 9- by 13-inch baking pan or large casserole. Set aside.
On the stovetop, saute the sausage in a large cast iron skillet over
medium-high heat, crumbling with a wooden spoon, until browned and
cooked through. Add to the cornbread and pecans, but don't stir. Without
wiping out the skillet, melt the butter.
Add the onion and celery and cook until the vegetables have softened, 8 to
10 minutes.
Stir in the parsley, sage, rosemary, thyme, salt, pepper, and paprika. Pour
over the cornbread; again, don't stir.
In a small mixing bowl, beat the eggs with the milk. Add the chicken broth.
Pour the egg mixture over the cornbread mixture and stir gently to
combine the ingredients. Add more chicken broth if needed; you want the
mixture to be moist, but not soggy. Tip into the prepared baking dish.
Set the oven temperature to 325 degrees F and preheat.
Bake the stuffing until it is lightly browned and slightly crusty on top, 50 to 60 minutes. Let cool
slightly before serving. 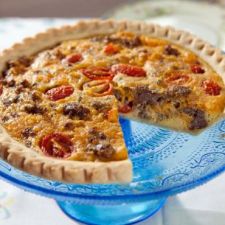