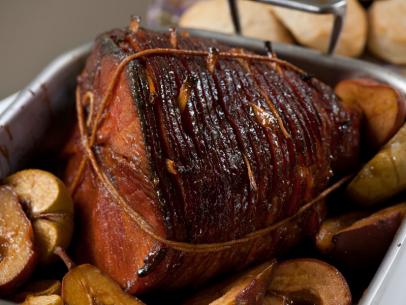 Honey baked move over, there is a new Ham in town! This Sugarcane Baked Ham with Spiced Apples & Pears is my new go-to ham recipe for those special occasions.

Preheat the oven to 350 degrees F.

Line a shallow baking pan with parchment or waxed paper. Insert the sugarcane sticks into the ham at 3 to 4-inch intervals. Tie the ham, using kitchen twine, horizontally and vertically, like a package, to hold it together. Place it on a wire rack in the baking pan.

In a mixing bowl, combine all of the glaze ingredients together except for the mustard and water. Mix well. In a small bowl, dissolve the mustard in the water, then add to the spice mixture. Blend well.

Remove the ham from the oven and let it rest for 5 minutes. Remove and discard the string and swizzle sticks. Serve the apples and pears on a platter with the ham. Serve everything warm or at room temperature.