In same skillet, over moderate heat, melt remaining 2 tablespoons of butter. Cook mushrooms until tender, 5 to 6 minutes. Scrape into bowl with onions.

In same skillet, toss potatoes with olive oil, rosemary, salt and pepper. Place skillet in the center of preheated oven and roast until potatoes are golden brown and tender, about 35 minutes. Remove from oven, spread evenly with mushroom and onion mixture. Sprinkle with cheese and return to oven. Cook until cheese is melted about 10 minutes longer.

Time saving tip: Onion and mushrooms may be cooked a day in advance. Cover and refrigerate.

These roasted potatoes remind me of the Swiss potato dish, rosti, which translates as "crunchy and golden" shredded potato pancakes. The layer of mushrooms and cheese enrich this homey potato dish. 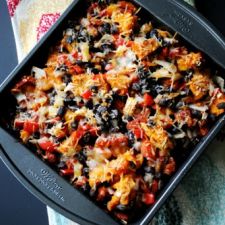